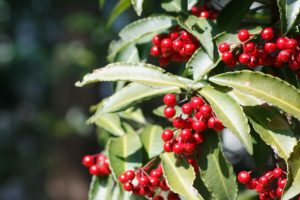 Living with asthma can be quite limiting, as those affected live in a constant state of preparedness with an inhaler ready just in case an asthmat attack strikes. It is estimated that about one in 12 people or 25 million in the United States have asthma, with 10 dying of the condition every day.

Asthma is a common long-term inflammatory disease characterized by swollen and narrowed airways and excess mucus production. Asthmatics often suffer from wheezing, coughing, and shortness of breath. Episodes can occur a few times a day or a few times per week and be life-threatening.

Treatment for asthma has been adequate for the most part, helping to relieved acute and chronic symptoms. However, researchers at the University of Bonn in Germany believe they have produced a more effective treatment. Best of all, they extracted this pharmaceutical ingredient from the leaves of the coralberry plant (Ardisia crenata).

The coralberry is a flowering plant that is native to East Asia. It also goes by the name of Christmas berry, Australian holly, and spiceberry. Interestingly, during the winter months, this plant grows bright red berries, making it a popular holiday fixture in many homes. But its leaves are what contain a substance with the potential to fight disease.

Current asthma treatment often relies on rescue inhalers and other symptom-controlling medication, depending on asthma severity. Patients must also avoid possible triggers such as air pollution and allergens. There is no cure for asthma, but it can be adequately treated.

A substance from the coralberry designated FR900359 has been found to be effective at preventing bronchial muscle spasms that afflict asthmatic patients. Early testing on mice has revealed that the coralberry leaf substance has a more lasting effect compared to commonly used asthma medication.

“We were able to prevent the animals from reacting to allergens such as house dust mites with a narrowing of the bronchia,” said Dr. Daniela Wenzel, who led the study.


Working at a biochemical level

Further investigation found that the leaf-derived substance prevented the signaling of critical proteins involved in controlling airway tone. By doing this, FR900359 can reduce the contraction of the respiratory tract. However, the researchers admit that it wouldn’t be possible to completely prevent such contractions in those who suffer from severe asthma.

Another benefit was that there were few side effects since FR900359 was inhaled, and patients were only exposed to a small quantity of the active ingredient.

More research is needed to test the effectiveness of FR900359 on humans, but preliminary laboratory testing looks promising. However, it could be years before the treatment is ready for mass use.

Severe asthma may be tackled with new biologic drug

Tips to manage asthma and allergies