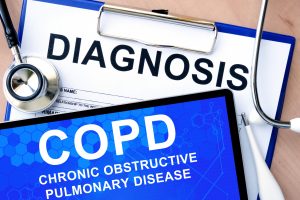 COPD (chronic obstructive pulmonary disease) is associated with depression, and a recent study has explained this link. COPD affects 24 million Americans, and although discussions have been taking place regarding a potential connection between COPD and depression, there was limited research done on the topic. In a new study, researchers found that one in four COPD patients suffer from depressive symptoms, and if left untreated, this could have a negative impact on a person’s health.

One study looked at three-year data from COPD patients. The study found that one in four COPD patients suffer from depressive symptoms. Patients with new or persistent depression experience more exacerbations of COPD and greater performance loss.

In a second study on the topic, researchers from the University of Texas analyzed data from a random sample of five percent of Medicare beneficiaries with COPD. The researchers found that 22.3 percent of those patients had at least one psychological disorders.

Dr. John Studdard, president-designate of the American College of Chest Physicians, said, “The prevalence of depression alongside COPD found in these two studies is alarming. Pulmonologists should consider the findings of this research when treating patients with COPD. The impact of depression coupled with COPD on quality of life, exacerbation likelihood, and readmissions should be further explored.”

Patients who had depression prior to COPD and who developed depression after being diagnosed with the condition experience heightened COPD symptoms. Depressed COPD patients also fare much worse on exercise tests as a result of greater function loss, compared to COPD patients without depression.

The results of the study reveal that doctors should also screen COPD patients for potential mental health issues as these can worsen their breathing condition and function.

Lead researcher Dr. Abebaw Mengistu Yohannes said, “We have found a previously unknown link between the brain and COPD. Mental health can have repercussions elsewhere in body, in this case, exacerbating the negative effects of COPD and poor prognosis in health outcomes. Essentially, we can treat the brain to treat the lungs and this is something health practitioners should be aware of when working with COPD patients.”

“It creates a strong argument for vigorous screening of mental health problems in patients who are admitted in the short term for exacerbations of COPD. Managing mental health problems associated with COPD should be an important part of the management plan for the short term as well as the discharge planning with longer-term follow-up,” Dr. Mengistu Yohannes concluded.

COPD seen in smokers even without diagnosis

Discovery in COPD could help with treatment