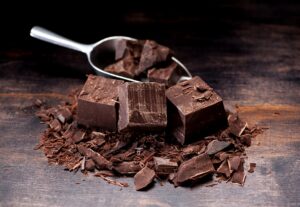 New research suggests that consuming dark chocolate has positive effects on brain functions. The study, which was conducted by a team of international researchers, found that eating dark chocolate improved the blood flow and function of the brain.

Additionally, the study participants who consumed dark chocolate displayed lower stress and anxiety levels. These findings could have important implications for those looking to improve their cognitive function and overall wellbeing. So, if you’re looking for a delicious way to boost your brainpower, be sure to indulge in some dark chocolate.

Nutritionists normally discourage chocolate because it is high in calories, fat, and sugar. However, cocoa, chocolate’s primary ingredient, has been found to have numerous qualities that could benefit both body and mind.

A new study by three researchers from the Isfahan University of Medical Science in Iran investigated the impact of different dark chocolate dietary patterns on specific regions of the brain. The findings, published in Nutritional Neuroscience, suggest that dark chocolate consumption may have beneficial effects on the brain of people suffering from chronic stress.

“The current study investigated the impact of different DC dietary patterns on synaptic potency and plasticity in the hippocampal CA1 area, as well as food intake and body weight in rats under chronic isolation stress,” the researchers wrote in their paper.

Chronic stress has previously been shown to cause brain dysfunction, but this new study suggests that the consumption of dark chocolate may positively affect these brain functions.

Pure cocoa is a powerful source of antioxidants, substances that can prevent or reduce the amount of cell damage caused by free radicals. In addition to being highly nutritious, cocoa has been found to help regulate blood pressure and prevent cognitive decline.

Despite these naturally healthy benefits, chocolate bars in the stores rarely contain cocoa alone. They often include oils, sugar, butter, and other unhealthy ingredients. To get the most benefits from cocoa, look for dark chocolate comprised of a high percentage of cocoa.

Although the results of this study show how dark chocolate can help with brain function, it should be included as only one part of a healthy lifestyle to help reduce the risk of cognitive decline.

Some degree of cognitive decline is inevitable as you age, but there are also numerous factors that can take a toll on the ability of the brain to function at peak potential. This can affect memory, concentration, and overall brain function.

The Smart Pill can help to enhance cognitive function and memory through 9 ingredients that help to support, nourish, and maximize brain health. These include ginkgo Biloba, huperzine A, bacopa extract, rosemary extract, and a B vitamin complex. This unique formula helps to boost circulation, fight free radicals, and provide nutritional support to assist with cognitive