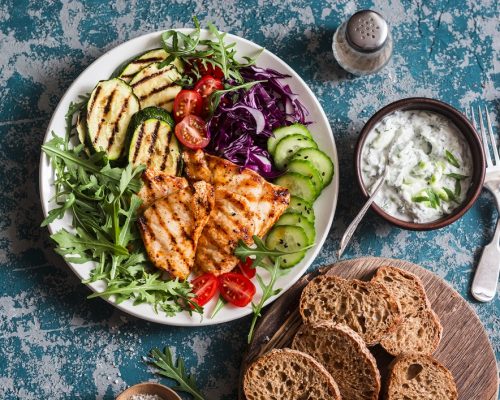 Enjoying a Mediterranean diet may help with brain aging as you get older. This statement comes from a new study by a team of researchers in Scotland who set out to determine whether the popular diet affected cognition.

The Mediterranean diet has long been associated with health benefits, including cardiovascular health. But this new study aimed to find a relationship between the specific types of foods and brain aging.

The Mediterranean diet is commonly known to include olive oil, nuts, fruits, vegetables, and whole grains, with chicken and fish. Red meat, eggs, and dairy are only consumed in low to moderate amounts. This was the basis of the diet that was considered in the study.

Researchers tested the mental ability of over 500 people with an average of 79 years of age for the study. None of the participants showed any signs of dementia. Each one was required to perform tests focused on problem-solving, thinking speed, memory, and word knowledge.

Over 350 of the participants also had an MRI brain scan. Researchers believe that both cognitive ability and brain MRI markers together are important because they can help further understand the relationship between what we eat and cognitive aging. Participants were also required to fill out questionnaires on what their typical diets were over the past year.

It was found that people who adhered more closely to the Mediterranean diet tended to score better in specific brain functions such as verbal ability, memory, and visuospatial ability (people’s ability to analyze and mentally alter objects).

After adjusting for childhood IQ and other education and health factors, the results still showed a significant benefit to brain health for those who consumed a Mediterranean diet. The strongest association was found on verbal ability function, but the diet showed no effects on the brain’s structure, as shown on the MRIs.

The fact that the brain appeared to function differently depending on diet but didn’t look differently could be due to brain health. Researchers hypothesize that inflammation in the brain and other nutrients like magnesium or folate could influence cognitive ability.

The role of healthy fats such as monounsaturated and polyunsaturated fats also appears to play a role in keeping the brain and body functioning at their best. The healthy fats found in high amounts in the Mediterranean diet help to reduce inflammation in the body. It helps to protect blood vessels, which lead to the brain.

High amounts of antioxidants also found in the Mediterranean diet could also help to keep the brain sharp. With all the benefits of the diet, it is no wonder it can help to improve brain health in aging.

Less healthy diets could have the exact opposite effect. These diets, which are dominated by processed foods, tend to be high in red meat, potatoes, and sugary, fried foods. Processed foods are also packed with excessive salt, sugar, and other components that can make them both cheap and addictive.

The good news is that it is never too late to change your diet. Experts believe that no matter how long you have been consuming an unhealthy diet, your health can still improve once a new healthy diet is started.