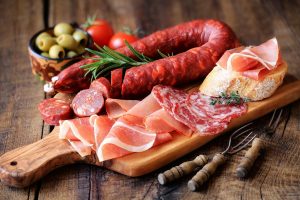 Processed meat has previously been linked to a host of health issues, and new research shows that dementia can now be added to the list. Scientists from the University of Leeds have found an increased risk of dementia in those who consumed even small amounts of processed meat a day.

For the study, researchers used data from 500,000 people aged 40 to 69 from the UK Biobank. They discovered that consuming just 25g of processed meat a day is associated with a 44% increased risk of developing the disease. To help put this into perspective, 25g of meat is roughly the equivalent of one strip of bacon.

The findings also showed that eating some unprocessed red meat such as pork, beef, or veal could be protective against dementia. Those who consumed 50g a day were 18% less likely to develop dementia.

Among the participants in the study, 2,896 cases of dementia were reported over an average of eight years of follow-up. More men were in this group, along with participants who were generally older, less educated, less economically stable, less physically active, and more likely to smoke. They were also more likely to have a stroke history and family dementia history while being carriers of a gene that is associated with dementia.

Lead researcher Huifeng Zhang said: “Worldwide, the prevalence of dementia is increasing, and diet as a modifiable factor could play a role. Our research adds to the growing body of evidence linking processed meat consumption to increased risk of a range of non-transmissible diseases.”

Dementia risk and meat consumption has been previously associated, but this is believed to be the first large-scale study of participants over time to examine a link between meat types and amounts.

With around 50 million dementia cases globally, researchers are trying to fill the gaps of knowledge about the disease to help reduce the risk. It is well known that dementia is associated with genetic and environmental factors, including diet and lifestyle, so health care providers need to suggest changes to their patients.