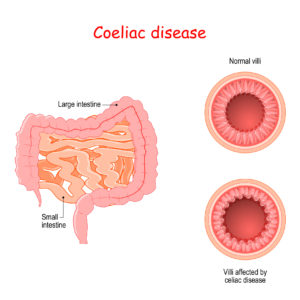 Physicians have long suspected a relationship between celiac disease and inflammatory bowel disease (IBD). However, the association was never proven. But a new study from the Farncombe Family Digestive Health Research Institute at McMaster in collaboration with the Society for the Study of Celiac Disease has found that there is a nine-fold increased risk of having IBD for patients with a previous diagnosis of celiac disease. They also concluded that the risk for celiac disease is increased in IBD patients, though to a smaller extent.

“Clinicians have always suspected that IBD and celiac disease may be linked, however a clear association was never established,” said first study author Maria Ines Pinto-Sanchez, associate professor of medicine and member of the Farncombe Family Digestive Health Research Institute at McMaster.

“This is important, as failure to diagnose one or the other condition could compromise proper response to available treatments. It also raises questions on screening for the other disease in a patient already diagnosed with either IBD or celiac disease.”

Details published in the journal Gastroenterology outline how inflammatory bowel disease and celiac disease are chronic and disabling intestinal conditions affecting many people worldwide. Both diseases have similar risk factors and their prevalence has increased in the past years.

For their analysis, researchers included 65 studies out of the 9,800 studies identified. Of those, 30 studies included control groups with a total of 13.6 million participants, including: 43,000 celiac patients, 166,000 IBD patients (39,000 Crohn’s disease, 56,000 ulcerative colitis, and 3,000 indeterminate colitis patients), and 13.4 million controls. All studies were published between 1978 and 2019 and the majority were in Europe, followed by North America and Asia.

“Our review has confirmed that there is a strong association between celiac disease and IBD, but at this time, it is unclear whether screening of IBD should be performed in celiac disease and vice versa,” said corresponding study author Elena Verdu, professor of medicine and scientist of the Farncombe Family Digestive Health Research Institute at McMaster.

“More studies into the association of IBD and celiac disease are needed, as this could lead to screening and therapeutic interventions to improve patient outcomes.”

IBD and celiac disease are both chronic and disabling intestinal conditions that affect people of all ages. Studies show how both gastrointestinal diseases have partially common genetic backgrounds, which could explain the common connection. Therefore, the most important thing is that IBD patients are made aware of the symptoms of celiac disease and vice versa.

Researchers believe the next step is to determine if testing for IBD is cost-effective and beneficial to patients. As the number of those affected by the diseases are increasing, it is important to find any relationships between the two to help reduce risk factors.