Home » Health News » Should you be concerned about spider veins? 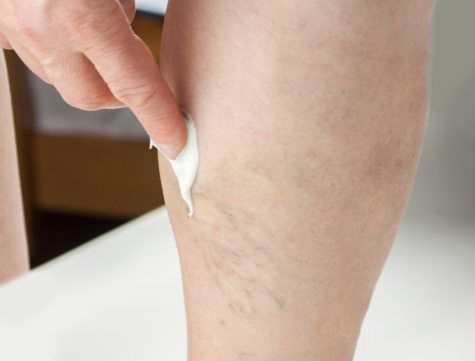 Spider veins — technically known as telangiectasia — are a cousin of varicose veins, those unsightly blue lines that run up and down your legs. Varicose veins are dangerous, as they increase the risk of deep vein thrombosis.

Spider veins are smaller in appearance and are a result of damaged blood vessels below the skins surface, so they appear like small purple spider webs.

A condition known as hereditary hemorrhagic telangiectasia (HHT) is rare but serious. HHT is a serious condition that affects all the major organs — some patients may even experience gastro-intestinal bleeding.

In HHT, arteriovenous malformations occur, which cause blood to flow directly through the veins instead of the capillaries. This causes them to appear beneath the skins surface as spider veins.


Capillaries work to slow down blood flow. So, when blood goes straight to the veins, there is often high pressure. Veins also aren’t as flexible as capillaries and have thinner walls, making the high-pressure blood more damaging. This added pressure along the venous walls causes them to become enlarged, which creates irritation or damage. In some cases, HHT can lead to hemorrhaging, particularly in organs like the liver, brain, and lungs.

There are different types of HHT that present symptoms at different times and also lead to different leaks or hemorrhages of different organs. As a result, complications such as heart failure, anemia, cerebral abscess, cirrhosis, or stroke can occur.

Between one in 5,000 and one in 8,000 people suffer from a form of HHT and symptoms may not occur until a person’s teenage years. Unfortunately, HHT often goes undiagnosed or misdiagnosed. In one study of patients with HHT, 74 percent of patients had vascular abnormalities, while only eight percent of patients showed symptoms.

As mentioned, HHT is a rare condition and is often passed down through generations. If anything ever appears on your body, it doesn’t hurt to have it checked out. Even if the condition isn’t HHT, it could be something else that is far easier to treat, so why not have it checked out to be safe?

Related: Vein pain: What causes painful veins and how to get rid of it