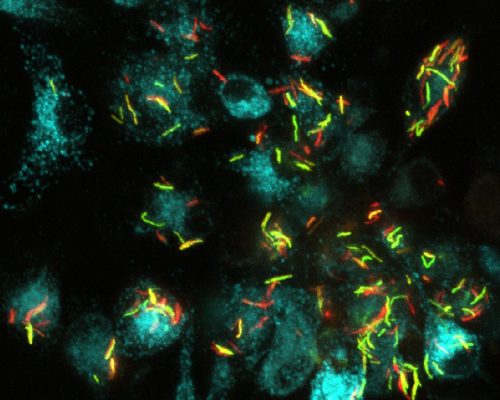 A recent study by scientists at Michigan State University suggests that even drug resistant tuberculosis can be effectively treated with a common glaucoma medication.

The study, which was led by MSU microbiologist Robert Abramovitch and graduate student Benjamin Johnson, is published in current issue of Antimicrobial Agents and Chemotherapy.

The scientists discovered that the sulfonamide medication – ethoxzolamide – that is found in many prescription glaucoma drugs can effectively turn off Mycobacterium Tuberculosis’s ability to invade the immune system. The team found ethoxzolamide reduces disease symptoms in mice.

Statistics reveal that globally two-billion people carry the infection in a dormant state, and the immune system is able to keep it in check and prevent it from spreading in the body. But once the immune system gets weakened by other disease or even a simple infection like a ‘flu’, the bacterium will spring into action and make its presence felt.

For many years, scientists have been trying to drive out these dormant bacterium, without much success.

The tuberculosis bacterium may not have eyes and ears, but it has the uncanny ability to sense certain environmental changes in the body and adapt to the change.

This includes its ability to detect a change in pH – or acidity levels – which tells the bacterium it’s being attacked by a host immune cell.

During their research, Abramovitch and his team, found that ethoxzolamide inhibits TB’s ability to detect acidic environments. By doing this the compound, effectively blindfolds the bacterium. Not being able to sense the oncoming, immune system’s assault, the bacterium gets engulfed and defeated.

According to Abravomitch, by stopping the bacterium from unleashing its weapons, ethoxzolamide makes it virtually impotent.

Finding the compound that could inhibit the bacterium’s ability to detect acidic environments was like searching for a needle in a haystack. Abramovitch and his team screened 273,000 different compounds, using a synthetic bio-sensor that they developed. The sensor glows green in response to conditions that mimic TB infection and it helped the team finally arrive at the winning compound.

This compound has the dual potential of preventing the disease from spreading, and also help shorten the length of treatment, thus preventing drug resistance.

The single biggest reason for the evolution of drug-resistant strains is the long course of treatment. By shortening the duration, these resistant strains will find it difficult to develop.

“We don’t necessarily have to find drugs that kill TB, we just need to find ones that interfere with the bug’s ability to sense and resist the immune system,” said Abramovitch. “By giving the immune system a helping hand, natural defenses can then kill the bacteria”.