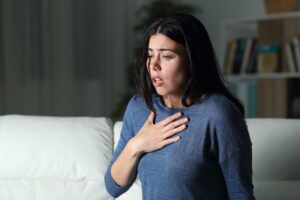 An asthma attack is a scary experience — lungs and airways tighten up, making it feel nearly impossible to get the air you need to breathe. Many will reach for their steroid inhaler when symptoms flare, but it fails to help for some.

New research has attempted to learn why the most popular treatment for asthma attacks, corticosteroids, are often ineffective. Corticosteroid inhalers are used to decrease airway swelling and irritation. However, they seem to only be effective in people with moderate asthma.

The inhalers are far less likely to help those with severe cases of the condition.

According to the American Lung Association, of the 25 million people in the United States with asthma, an estimated 5 to 10 percent have severe asthma.

The American Academy of Allergy, Asthma, & Immunology defines severe asthma as someone requiring medium or high-dose inhaled corticosteroids combined with other longer-acting medications. It is also considered severe if it is uncontrolled despite the use of these medications.

Individuals with severe asthma often feel symptoms throughout most days and nights.

This recent study, published in late May, found that two naturally occurring growth factors – natural substances that stimulate cell growth – activate in the airway lining of cells in severe asthma patients when they inhale corticosteroids and block them from working.

These new findings suggest that different cellular pathways work in the airways of patients with severe asthma, especially those involved with inflammation.

Using tests on mice, researchers found that when they blocked the chemicals that trigger the secretion of the two growth factors, corticosteroids were able to reverse airway inflammation. Research done in animals, however, often leads to different results than in humans.

However, the results create an avenue for looking into new and more effective treatments for people with severe asthma.