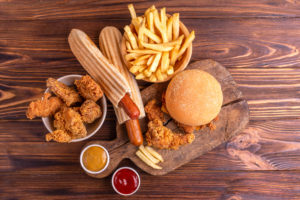 What foods you eat together may be associated with your risk of dementia, according to a new study published in Neurology, the medical journal of the American Academy of Neurology. While it is no surprise that a healthy diet may benefit the brain, this study shows the surprising way that the combination of foods may also impact brain function.

Researchers from the University of Bordeaux in France looked at “food networks” and found that those whose diets consisted of starches, highly-processed meats, and sugary snacks were more likely to have dementia years later compared to those who ate a wider variety of healthy foods.

“There is a complex inter-connectedness of foods in a person’s diet, and it is important to understand how these different connections, or food networks, may affect the brain because diet could be a promising way to prevent dementia,” said study author Cécilia Samieri, Ph.D. “Several studies have shown that eating a healthier diet, for example, a diet rich in green leafy vegetables, berries, nuts, whole grains and fish, may lower a person’s risk of dementia. Many of those studies focused on quantity and frequency of foods. Our study went one step further to look at food networks and found important differences in the ways in which food items were co-consumed in people who went on to develop dementia and those who did not.”

The study analyzed information from 209 people with an average age of 78 who had dementia and 418 people who did not have dementia. Both groups were matched for age, sex, and educational level.

Participants were required to complete a food questionnaire for five years outlining the types of foods they consumed and how frequently they consumed them. All participants had medical checkups every two to three years.
After analyzing all data provided from participants, researchers found that while there were few differences in the number of individual foods that people ate, overall food groups or networks differed substantially between people who had dementia and those who did not have dementia.

Researchers concluded that those who did not have dementia were more likely to have more diversity in their diet. This was demonstrated by many small food networks that usually included healthier foods such as fruit and vegetables.

“We found that more diversity in diet, and greater inclusion of a variety of healthy foods, is related to less dementia,” said Samieri. “In fact, we found differences in food networks that could be seen years before people with dementia were diagnosed. Our findings suggest that studying diet by looking at food networks may help untangle the complexity of diet and biology in health and disease.”

Researchers hope these findings will help physicians better understand the development of dementia and help them explain the importance of early lifestyle changes to their patients. A healthy diet and getting plenty of exercises are key components to reducing the risk of dementia and many other health issues and diseases.