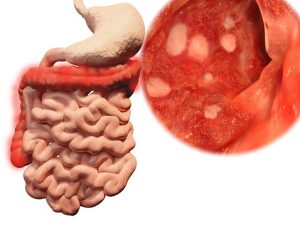 Following a Western diet causes gut bacteria changes that trigger colitis. A typical Western diet contains high levels of saturated fat, which has been found to be associated with complex immune disorders in those with a genetic predisposition. The immune disorders include inflammatory bowel diseases (IBD), like Crohn’s disease or ulcerative colitis. The findings of the latest study reveal a possible explanation as to why IBD is on the rise in the westernized societies.

Researchers from the University of Chicago found that concentrated milk fats can alter the composition of the intestines. These fats are commonly found in processed and confectionary foods. The changes these fats make can disrupt the truce between the intestines and the immune system, causing an influx of harmful bacteria that can release a damaging immune response.

Study author Eugene B. Chang said, “This is the first plausible mechanism showing step by step how Western-style diets contribute to the rapid and ongoing increase in the incidence of inflammatory bowel disease. We know how certain genetic differences can increase the risk for these diseases, but moving from elevated risk to the development of disease seems to require a second event which may be encountered because of our changing lifestyle.”

The researchers conducted their study with a mouse model, which is mimicking human IBD. They genetically deleted a molecule that acts as a brake on the immune response to intestinal bacteria. The researchers found that this led to the development of colitis in 25 percent of the mice when they were fed a low-fat diet or a diet high in polyunsaturated fats. When the mice were exposed to a diet high in saturated milk fats, colitis development in the mice increased to 60 percent within six months. Furthermore, colitis in the diet high in saturated milk fats was far more severe, compared to the low fat-fed mice.

Speaking of an explanation as to why milk fat would cause an inflammatory response, the researchers suggest it has to do with the gut microbiome, which is a mix of hundreds of bacterial strains found in the bowel.

The researchers uncovered high levels of Bilophila wadsworthia – a bacterium that has also been found in other inflammatory disorders – in the milk. Levels of B. wadsworthia were found to be nearly nonexistent in the mice on the low-fat diet, compared to the ones with the saturated milk fats. Chang added, “Here we show how the trend in consumption of Western-type diets by many societies can potentially tip the mutualistic balance between host and microbe to a state that favors the onset of disease.”

The researchers recognize that although genetic predisposition cannot be changed and a change in diet isn’t foolproof, they do acknowledge that microbes found in the gut and intestines can be restored to a healthy state, which may help better prevent IBD with little effect on a person’s lifestyle.

Although each person is different, there are certain colitis triggers that have been found to be common among many patients, including:

Identifying and avoiding your triggers can help you better manage your condition and minimize symptoms associated with ulcerative colitis.

Altering your diet to avoid certain foods may be difficult at first, but it does become easier over time. Speaking with your doctor or a nutritionist can help narrow in a diet that best works for you and your lifestyle. Diet plays a large role in reducing symptoms related to colitis, and so it is best that you make these changes.