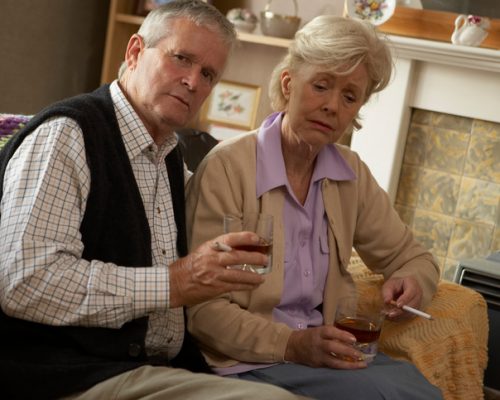 Cognitive decline in old age has been linked to smoking and heavy drinking. Smoking is becoming an increasingly common risk factor for dementia, so the researchers examined the association between smoking history and cognitive decline from midlife to older age.

The researchers analyzed the data based on the six assessments of smoking status over 25 years, along with cognitive assessments over 10 years.

No association was found between cognitive decline and smoking in women. This may be due to the fact that men tend to smoke more tobacco than women.

The researchers from the University of Florida asked 31 men and 35 women to complete a series of brain tests.

The participants were divided into groups based on their alcohol intake: non-drinkers, moderate drinkers, and heavy drinkers.

Nearly 53 percent of the participants had a lifetime history of alcohol dependency at some point, and 21 percent were considered heavy drinkers. The researchers also monitored total brain functions like attention, learning, memory, motor function, and more.

The study found that older heavy drinkers had lower scores on cognitive function. A lifelong history of alcohol dependency was also associated with worse learning, motor function, and memory. These participants also had reduced attention or executive function (such as reasoning and working memory), regardless of age.

Dr. Marc Gordon, chief of neurology at Zucker Hillside Hospital, said, “It is not surprising that lifetime alcohol dependence would have long-term adverse effects on cognition [thinking], nor is it surprising that heavy alcohol use in older adults would also be associated with worse cognition.”

Dr. Gisele Wolf-Klein, a geriatrics doctor at Northwell Health, added, “Medication regimens can be negatively affected by the use of alcohol. Use of alcohol is better avoided altogether in older adults — or at least reported and discussed openly with their primary care doctors.”

Alcoholics may be missing key enzyme that controls impulses to drink