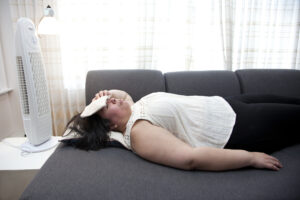 The negative effects of climate change have become highly noticeable in daily life. Food prices, human migration, animal migration, and illnesses like COVID-19 and monkeypox are all likely impacts of rising temperatures.

Extreme weather patterns are also a regular reminder that things are changing. And with summer set to arrive in the northern hemisphere, researchers from the University of Copenhagen have shown how these rising temperatures will contribute to lost sleep.

Anyone who’s ever attempted to sleep through a hot summer’s night knows it isn’t easy.

It’s uncomfortable and very difficult for your body to reach a temperature suitable for a good night’s shut eye. And as those nights pile up, it can take a toll on your health.

In a global study, researchers used data from more than 47,600 people from 68 countries wearing sleep tracking wristbands from September 2015 through October 2017. They then compared the 7.4 million sleep records they’d collected with local weather and climate data to assess how it affected sleep.

They found that nights that were randomly warmer than average eroded sleep duration in people around the world. People slept less, and the probability of shorter sleep increased as nights got hotter.

The data suggested that on very warm nights – 86 degrees Fahrenheit or hotter (30 degrees Celsius) – sleep declined an average of 14 minutes and boosted the likelihood a person would get less than seven hours.

People tended to fall asleep later and get up earlier on these nights.

They also found that the hotter it gets, the less people sleep. Further, the lost sleep is not compensated for on subsequent nights or with daytime rest, and people do not seem to acclimatize to higher seasonal temperatures.

People over 60, low-income individuals, and women seemed to have sleep particularly affected by heat.

So, what are you supposed to do when the heat keeps you from getting a good night’s sleep? There are some options: