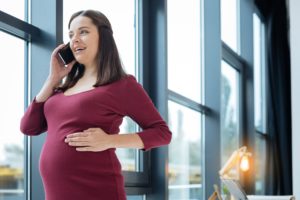 The Ohio State University researchers made the discovery, which is the first to show evidence of this gestational stress response in the brain. This is a surprising discovery because the immune system in both the body and brain is suppressed during a normal pregnancy.

Researchers had been previously studying the brain biology behind postpartum depression where they created depressive symptoms in pregnant rats by exposing them to chronic stress. Studies in the past have shown that chronic stress during pregnancy is a common predictor of postpartum depression. It is characterized by extreme sadness, exhaustion, and anxiety that can interfere with a mother’s ability to care for herself and her baby.

This study shows that in unstressed rats, the normal suppression of the immune system and brain remained intact throughout pregnancy. In contrast, stressed rats showed evidence of inflammation in the brain. Researchers also found that the stressed rats’ immune response in the rest of their bodies was not active.

Benedetta Leuner, associate professor of psychology at Ohio State and lead author of the study, speculates that the changes her lab has seen before in the brain and this immune response when chronic stress is present is happening in parallel and may be directly related.

For this study, rats were exposed to unpredictable and varied stressful events throughout their pregnancies. This practice involved adding a component of psychological stress that does not harm the health of the mother or her offspring.

Although pregnancy is known to suppress the body’s immune system, Leuner’s team showed in a previous study that the same suppression of the immune system happens in the brain during pregnancy.

The study is the first to show evidence of this gestational stress response in the brain. Leuner and colleagues now plan to study whether the brain immune cells activated during gestational stress are responsible for dendritic spine elimination, which are hair-like growths on brain cells that are used to exchange information with other neurons.