The pancreas is an organ located in the abdomen and is responsible for producing enzymes and hormones to help digest and breakdown food. These enzymes and hormones are released into the small intestine and bloodstream to help further break down food from the stomach. The pancreas also produces insulin to help moderate blood sugar levels. In diabetics the pancreas does not work properly and overproduces insulin because the body does not use it properly, leading to high levels of sugar in the body.

Genetic mutations along with smoking and alcohol lead to chronic pancreatitis 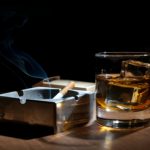 Senior investigator, David Whitcomb, M.D., Ph.D., said, “Smoking and drinking are known to be strong risk factors for chronic pancreatitis, but not everyone who smokes or drinks damages their pancreas. Our new study identifies gene variants that when combined with these lifestyle factors make people susceptible to chronic pancreatitis and may be useful to prevent patients from developing it.”

The researchers found that a certain variant of the CRTC gene was a strong risk factor in smoking and alcohol-associated chronic pancreatitis.

Dr. Whitcomb added, “This finding presents us with a window of opportunity to intervene in the diseases process. When people come to the hospital with acute pancreatitis, we could screen for this gene variant and do everything possible to help those who have it quit smoking and drinking alcohol, as well as test new treatments, because they have the greatest risk of progressing to end-stage chronic pancreatitis.”


Symptoms and causes of chronic pancreatitis 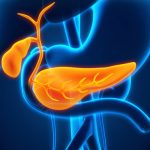 Other causes of chronic pancreatitis are injury to the pancreas, blocked or narrowed ducts in the pancreas, smoking and radiotherapy on the abdomen.

Symptoms of chronic pancreatitis include:

Unfortunately, there is no clear-cut way to diagnose chronic pancreatitis, so it’s important for a doctor to evaluate a person’s symptoms as well as history – past acute pancreatitis, history or alcohol. Blood tests may be conducted to check glucose levels and an ultrasound can be done in order to get a better look at the pancreas. Other imaging tests involve a CT scan, magnetic resonance cholangiopancreatography scan and an endoscopic retrograde cholangiopancreatography scan. Imaging scans to diagnose chronic pancreatitis are useful because they allow for a closer look at the pancreas, which can help to spot inflammation.

Treatment options for chronic pancreatitis include the following:

Foods to avoid with chronic pancreatitis include:

With the help of your doctor or a dietician, you can consume a diet safe for chronic pancreatitis and not one that aggravates it or leads to more pain. The above guidelines are a good beginning, but always talk to your doctor before switching your diet.