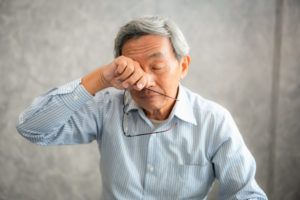 Many people who take a popular vitamin for lowering cholesterol may be at a higher risk for eye damage. In a first-of-its-kind clinical report, this new study has shown that severe vision loss can occur from over-the-counter niacin and is linked to injury of a specific cell type in a patient’s eye.

The report from retina specialists at the New York Eye and Ear Infirmary of Mount Sinai (NYEE) did show that discontinuing the vitamin niacin led to a reversal of the condition. This was published in the fall issue of Journal of VitreoRetinal Diseases.

Niacin, also known as vitamin B3, is commonly used for lowering cholesterol and hyperlipidemia and is available in both over-the-counter and prescription forms. Although it is a common vitamin often prescribed by health care professionals, this study is the first to show that it can produce a rare toxic reaction called niacin-induced cystoid maculopathy. This is a form of retinal swelling.

Lead investigator Richard Rosen, MD, Chief of Retina Services at NYEE and the Mount Sinai Health System spoke about the study. “People often live by the philosophy that if a little bit is good, more should be better. This study shows how dangerous large doses of a commonly used over-the-counter medication can be. People who depend on vision for their livelihood need to realize there could be long-lasting consequences from inadvertent overdosing on this vitamin.”

“This case serves to remind everyone about the importance of talking to one’s physician prior to taking any supplement, or over-the-counter product. Just because nutritional supplements are available without a prescription does not mean they are completely safe to use without supervision,” explains corresponding author Jessica Lee, MD, Assistant Professor of Ophthalmology at the Icahn School of Medicine at Mount Sinai. “No matter how benign a supplement or over-the-counter product may seem, the correct dosage and potential interactions with other medications should be carefully reviewed with a doctor, to avoid preventable unexpected consequences. This case illustrates how dangerous casual self-prescribing of megadoses of vitamins can be.”

This research came after the team of investigators from NYEE reported on a 61-year-old patient who arrived at the hospital with worsening blurry vision in both eyes that began a month earlier. After the patient admitted to taking three to six grams of niacin daily for several months to reduce his risk of cardiovascular events, he was diagnosed with a rare toxic reaction called niacin-induced maculopathy.

The ophthalmologists from NYEE had the patient stop taking the niacin, and at his one-week follow-up appointment, it was found that his eye damage had noticeably improved. Two months later, the dysfunction had completely resolved and his vision had reverted back to 20/20.

“While retina specialists have been aware of this unusual reaction to niacin for many years, such a textbook example of extreme toxicity and recovery has never been as well documented by imaging and functional testing,” said Dr. Rosen.

Many people take vitamins and supplements as a natural way of lowering not only cholesterol, but for many other ailments such as cardiovascular disease. If you do take supplements, be sure to check with a doctor to make sure it is the right natural choice for you. This study does show that even natural medicine can have some unwanted side effects, so dosage should be closely monitored by a health care professional.