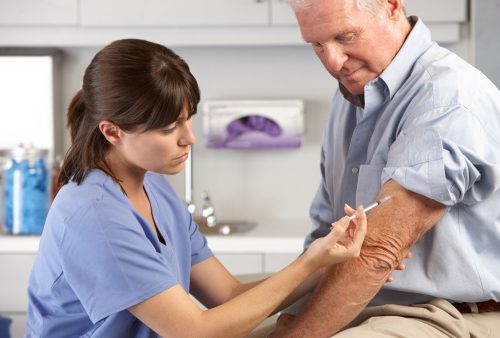 High cholesterol is a national epidemic in America today. Nearly 73 million Americans have high amounts of “bad” cholesterol and only one in every three adults has their condition under control. Having high cholesterol puts you at risk for developing heart disease—one of the leading causes of death in the United States.

It is recommended that affected individuals exercise, eat a healthy diet, and cease smoking to help reduce their cholesterol levels. However, this is often too much for most people to do, resulting in their dependence on pharmaceutical cholesterol-lowering medication to help lower their risk of developing high cholesterol complications.

This may change, as someday, controlling your cholesterol could be as simple as getting a vaccination.

A group of researchers in Australia have successfully created a vaccine that might help fight arterial cholesterol build-up in mice. While still in the early phases of testing, the researchers are cautiously optimistic, as studies in mice do not always translate well to humans.

“If these findings translate successfully into humans, this could mean that … we could develop a long-lasting therapy that, after the first vaccination, just needs an annual booster,” said study co-author Gunther Staffler, chief technology officer at AFFiRis.

Having a vaccination shot will make it easier for patients to adhere to effective treatment plans.

A study in mice was carried out to test the effectiveness of this new type of vaccination. First, the mice were fed a high-fat diet that raised cholesterol levels and narrowed their blood vessels—not unlike how humans develop high cholesterol.

The vaccine works by triggering the activation of certain immune system antibodies that then proceed to target an enzyme called PCKS9. This enzyme is known for preventing the clearance of bad cholesterol from your blood vessels.

Two groups of mice were made—one that received that experimental vaccination and another that didn’t.
The vaccinated mice were found to have 53 percent lower total cholesterol, 64 percent less narrowing in their arteries, and lower levels of biomarkers in the blood. These effects were long-term, as antibodies remained high at the end of the study, with effects lasting up to a year.

“If this is achieved [in humans], this vaccine represents a revolutionary breakthrough in our options for the treatment and prevention of heart disease,” said Dr. Rachel Bond, who helps direct Women’s Heart Health at Lenox Hill Hospital in New York City.

Humans trials are next

The next step is to carry out human trials, which are expected to be completed by the end of the year. Safety is of the utmost concern when testing a new vaccine in human subjects. Its long-term effects need to be studied in detail. While limited to no side effects were observed in the carried-out mouse studies, humans may react differently.

Surprising ways to lower your cholesterol