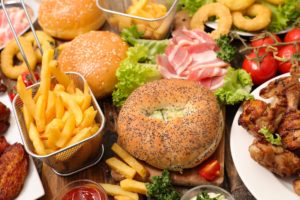 Cholesterol-enriched foods and high-fat diets may lead to vision loss later in life. The latest research findings suggest that an unhealthy diet can damage retinal pigment epithelial (RPE) cells. On the other hand, there may be a new breakthrough in treatment for age-related macular degeneration (AMD) in light of these new findings.

AMD is the leading cause of blindness and is an irreversible condition. It is often caused by genetics, smoking, environmental factors, high blood pressure, and being overweight. AMD commonly affects central vision, which can make it more challenging to recognize faces.

Although not much is known about the connection between poor nutrition and vision loss, the researchers now suspect it is due to RPE cells.

Healthy RPE cells can cope with changes and are more flexible. They can adjust to aging more reliably. A high-fat diet disrupts the breakdown of RPE cells, which can trigger vision loss.

Lead researcher Dr. Arjuna Ratnayaka explained, “Although the effects of poor nutrition in eye health have been studied in large populations, how this actually brings about disease-causing changes in retinal cells is less well understood.

“We also found that some lysosomes appeared to remain undamaged even in such stressed RPE, suggesting an altogether new way in which damaged cells could be rescued to prevent eventual sight-loss.

“As our results showed how the waste disposal system of the RPE becomes damaged by unhealthy diet-driven disease pathways, our next step is to find out whether this type of damage can be reversed through better nutrition and if stressed or damaged RPE cells can possibly be rescued. Potential new therapies developed along these lines could offer new treatments for some AMD patients.”

Although there is currently no cure for AMD, this study highlights the importance of eating healthy as a means of reducing your risk of AMD and other vision problems.