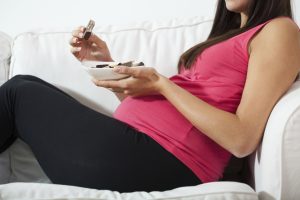 The health benefits of chocolate have long been studied, and now presented at the Society for Maternal-Fetal Medicine’s annual meeting, The Pregnancy Meeting™, as researchers explored the benefits of chocolate during pregnancy. So far noted benefits of chocolate during pregnancy include improving placenta function and reducing the risk of preeclampsia, which is a high blood pressure condition in pregnant women.
The study aimed to uncover the benefits of high-flavanol chocolate during pregnancy, and how it can reduce the risk of preeclampsia. The researchers conducted a single-center randomized controlled trial of 129 women with singleton pregnancy during 11 to 14 weeks gestation. The women were divided into either high-flavanol or low-flavanol chocolate groups. Thirty grams of chocolate was consumed daily over the course of 12 weeks, and the women were followed until delivery. Each woman had double-notching on uterine artery Doppler, and pulsatility index was taken at baseline and again at 12 weeks. Preeclampsia, gestational hypertension, birth weight, and placenta weight were also examined.

Researcher Emmanuel Bujold said, “This study indicates that chocolate could have a positive impact on placenta and fetal growth and development, and that chocolate’s effects are not solely and directly due to flavanol content.”