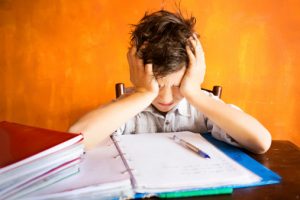 Childhood trauma – or experiencing mental stress – has been found to raise the risk of heart disease, stroke and diabetes in adults. The findings were published in the Journal of the American College of Cardiology.

Study author, Ashley Winning, said, “The most striking and perhaps sobering finding in our study is that high levels of childhood distress predicted heightened adult disease risk, even when there was no evidence that these high levels of distress persisted into adulthood. Greater attention must be paid to psychological distress in childhood. It is an important issue in its own right and may also set up a trajectory of risk of poor health as people age.”

At the age of 45 additional tests like cholesterol, heart rate, blood pressure and other tests to gauge the immune system were conducted.

The risk of heart disease and diabetes was highest in those who experienced high levels of stress throughout their life. Additionally, those who only had mental stress as a child still had a high risk of developing heart disease or diabetes in their adult life.

Although an association between childhood stress and later-life health risks was made, Winning does not suggest that it will necessarily happen to everyone. Factors other than high stress, like taking up smoking or lack of physical activity to cope with stress, could also largely contribute to later-life health consequences.

Cardiologist Dr. David Freedman suggests the best thing to do to avoid later-life health consequences it to better manage stress. “Perhaps a proper behavioral management strategy in early childhood and adulthood, as well as early cognitive retraining for those people who have distressed or traumatic personal issues, could lead to better cardiovascular outcomes,” suggested Freedman.

Having a strong social support was also suggested by Alison Holman, Ph.D., a researcher from the University of California. “Helping children learn how to manage their emotions when they come up is crucial. Nurturing them and inculcating healthy habits that support emotional balance is a good idea as well. For example, helping them learn how to eat well and incorporate exercise into their lives is really important as these will impact how they feel and respond to the stress around them,” Holman added.

Although the past cannot be changed, lifestyle habits in adulthood are still equally important in preventing such events like heart attack, stroke and diabetes.