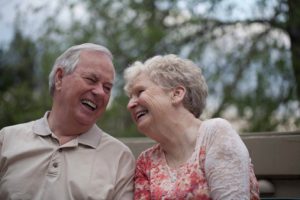 FTD is most commonly in those in their 50s and, unlike other forms of dementia, memory loss is not a predominant characteristic. Changes in humor have also been observed as an early sign of Alzheimer’s disease, which is the most common form of dementia and affects nearly 5.3 million Americans.

For the study researchers asked the friends and family of 48 patients with various forms of FTD or Alzheimer’s disease, along with 21 healthy volunteers, to answer questionnaires about their loved one’s sense of humor.

Additional questions aimed to uncover whether the family or friend noticed any differences or changes in their loved one’s sense of humor in the 15 years prior to their diagnosis. Additionally, they were asked if their loved one’s humor was ever inappropriate.

Results showed that individuals with FTD were more likely to behave inappropriately, such as laughing at a barking dog or laughing at a tragedy. Furthermore, those with FTD or Alzheimer’s disease were more likely to prefer slapstick humor compared to healthy individuals. Lastly, changes in humor were seen, on average, nine years before the symptoms of dementia were present.

Dr. Camilla Clark, study lead, said, “These findings have implications for diagnosis – not only should personality and behavior changes ring alarm bells, but clinicians themselves need to be more aware of these symptoms as an early sign of dementia. As well as providing clues to underlying brain changes, subtle differences in what we find funny could help differentiate between the different diseases that cause dementia. Humor could be a particularly sensitive way of detecting dementia because it puts demands on so many different aspects of brain function, such as puzzle solving, emotion and social awareness.”

After completing more studies similar to this one, researchers will be better able to pinpoint the early stages of dementia and begin treatment much sooner.