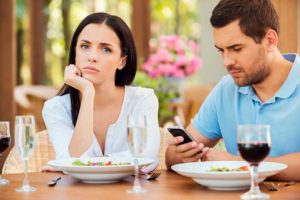 New research from Baylor University Hankamer School of Business has uncovered that not only are cellphones damaging to relationships, but they can lead to depression as well.

The study, published in Computers in Human Behavior, is called “My life has become a major distraction from my cell phone: Partner phubbing and relationship satisfaction among romantic partners.”

Two separate surveys were completed to achieve their findings. In total 453 Americans answered questions to determine the effects of “Pphubbing” – partner phone snubbing. The term refers to the level at which a person is distracted by their cellphone in the company of their partner.

Results from the first survey allowed researchers to create a “Partner Phubbing Scale” which identified common behaviors, including:

The second survey was given to romantic couples based on the Pphubbing scale. Areas of conflict, relationship satisfaction, depression and interpersonal attachment style were also measured.

Results of the survey revealed:

Co-author and assistant professor of marketing Meredith David, Ph. D. said, “In everyday interactions with significant others, people often assume that momentary distractions by their cell phones are not a big deal. However, our findings suggest that the more often a couple’s time spent together is interrupted by one individual attending to his/her cellphone, the less likely it is that the other individual is satisfied in the overall relationship.”

Roberts outlined that those with anxious attachment styles were more likely to become bothered with cellphone use. Furthermore, lower levels of relationship satisfaction, in large part due to Pphubbing, also created lower satisfaction in one’s life, thus resulting in higher levels of depression.

Roberts concluded, “When you think about the results, they are astounding. Something as common as cellphone use can undermine the bedrock of our happiness – our relationships with our romantic partners.”