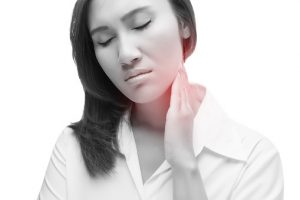 What are posterior cervical lymph nodes?

Posterior cervical lymph nodes are a group of glands located behind the neck, or in the cervical region of the spine. As part of the immune system, the glands contain scavenging white blood cells that fight off infections.

Having swollen cervical lymph nodes, also known as cervical lymphadenopathy, can often be a sign of infection, as the nodes also serve to filter out potentially harmful pathogens and microorganisms from the lymphatic system.

Lymph nodes are oval or kidney-shaped glands that are widely spread out throughout the body. They are linked by the lymphatic vessel as part of the circulatory system. Lymph nodes are major sites of B and T lymphocytes and other white blood cells; making them vital parts of the immune system.

Lymphatic tissue takes the form of nodes and vessels to form the lymphatic system of the body. The neck region—along with several other different groups of lymph nodes throughout the body, all of which are responsible for their designated region—helps deploy immune cells and drain lymphatic fluid. Because of this, doctors can use them to pinpoint where an infection may be located.

During times of infection or disease, lymph nodes will begin to release more lymphocytes (white blood cells). This usually causes them to swell in size.

Sometimes lymph node swelling may be due to the blockage of lymphatic vessels from an infection or abnormality. Once this pathway has been cleared by the body, flow can return to normal and cause the lymph node to return back to normal size.

Diseases that affect the immune system’s ability to do its job can lead to the lymph nodes in the neck becoming swollen. They can also cause a multitude of health complications. Autoimmune disease, where your own immune system mistakenly sees your own body as a foreign invader and attacks it, is one trigger behind swollen lymph nodes. Some other examples are rheumatoid arthritis, HIV/AIDS, and systemic lupus erythematosus (SLE).

Certain drugs, such as carbamazepine and phenytoin, have swollen neck lymph nodes as a side effect. Live vaccines, such as the MMR vaccine given to children, can be virulent enough to cause posterior cervical lymph nodes to swell. However, it is important to note that this effect is only temporary, and the vaccine is considered safe to use.

Swollen posterior cervical lymph nodes are seldom a feature of cancer, but may be present in lymphoma—a cancer of the lymphatic system. Metastasis (when cancer spreads from one part of the body to another) and leukemia (cancer of the blood) may also trigger swollen lymph nodes. Depending on the type of cancer, the lymph nodes may or may not be painful.

Having swollen lymph nodes may not always be cause for concern, but in some cases it’s worth having a medical professional look at them.

Typically, swollen lymph nodes go away after the underlying infection has been treated successfully. However, if they remain for an extended duration and are accompanied by another symptom such as fatigue and weight loss, there may be a serious underlying condition you should have assessed right away.
Your doctor will generally get a full history of symptoms to get a better idea of why you may have swollen lymph nodes. Upon physical examination, the doctor will touch them to get a better idea of how inflamed they actually are. A blood test and possibly biopsy of the lymph node itself will often reveal any abnormalities.

It is recommended you see your doctor if you experience the following:

There is no specific treatment for swollen lymph nodes, instead treating the underlying condition is often the only thing required to help resolve them. This may include the use of antibiotics to help fight a bacterial infection and the use of painkillers to manage the pain.

Those with immune system disorders will have to utilize medication that essentially cripples the body’s ability to fight infections. Those affected by cancer will need chemotherapy, radiation, and/or surgery to help resolve the disease.