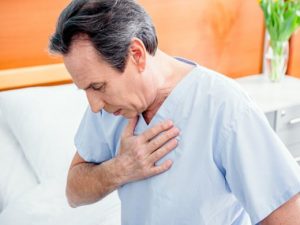 Right side chest pain is a commonly reported symptom experienced by many. While it may not have the same connotations as left-sided chest pain, which is often related to having a heart attack, right-sided chest pain can also be associated with several relatively unappreciated consequences.

The left side of the chest is often given more attention due to the fact that the heart resides more so on this side of the body. However, serious health problems can often present with right-sided chest pain that shouldn’t be neglected.

Anatomy of right side chest pain

The chest or thorax region of the upper body has a number of important organs that reside within it that may present with chest pain if they become compromised in some way.

What causes right side chest pain?

Occurs due to inflammation of the cartilage connecting the ribs and the sternum (breastbone). Pain in this area of the chest can become so severe that it may mimic that of a heart attack or other heart-related condition. Treatment is focused on reducing pain until the condition resolves on its own.

Also known as a pulled muscle whereby a muscle has become overstretched or torn. Often times, a muscle strain is the result of fatigue, overuse, or improper use of said muscle, most commonly involving the muscles of the lower back, neck, shoulder, and hamstring. Muscle strains can be a source of pain and decreased movement. Mild-to-moderate strains can be successfully treated with ice, heat, and anti-inflammatory medication, while more severe cases may require more intensive medical treatment.

Conditions that result in the abnormality of the vertebral disc of the spinal column, such as disc disease or a compressed vertebra, may cause pain to be referred to the right side of the chest. Metastatic cancer of the cervical spine may also spread to other areas in the thoracic cavity lending to chest pain on the right side.

Due to hardening or narrowing of the blood vessels of the heart and is primarily due to the build-up of cholesterol and plaque in the inner walls of these vessels, known as atherosclerosis. As this condition progresses, less and less oxygenated blood is able to reach the heart, leading to chest pain (angina) or even a heart attack. Coronary heart disease is the most common type of heart disease and the leading cause of death for both men and women in the United States.

Refers to the swelling and irritation of the sac-like layer of the heart called the pericardium. Inflammation of this membrane often causes chest pain when the irritated layers of the pericardium rub against each other. It is often difficult to determine the cause of pericarditis in the majority of cases; however, viral causes are often suspected.

A very serious yet relatively uncommon condition involving the large blood vessel of the heart. It is characterized by the inner layers of the aorta tearing apart from the outer layer, creating a pocket where blood can collect. This leads to further dissection of the two layers. If the blood-filled pocket ruptures, it can be fatal unless emergency medical treatment is provided. Aortic dissection is most frequently seen in men in their 60s and 70s.

Occurs due to blockage of one of the pulmonary arteries in the lungs. Pulmonary embolisms are due to free-floating blood clots, called emboli, that dislodge from another part of the body, often from the lower extremities after a condition called deep vein thrombosis. The blockage of blood flow to the lung can be life-threatening and should be treated right away to improve the chances of survival.

Developing a tumor of the right lung or near the lymph nodes can cause pain on the right side of the chest. Pain caused by lung cancer may also travel to the shoulder blades. Unfortunately, there is no screening test for the early diagnosis of lung cancer, resulting in most cases being far along in the course of the disease before they are identified. Other symptoms of lung cancer include shortness of breath and a persistent cough.

A serious and possibly life-threatening respiratory infection. It can be caused by viruses, bacteria, and fungi, resulting in the air sacs of the lungs filling with fluid or pus. It is estimated that about 900,000 Americans get pneumococcal pneumonia every year, and about five to seven percent of them die from it. Pneumonia can infect people of all ages, being most dangerous in those who are very young and very old, as their immune systems aren’t very strong. Symptoms of pneumonia often include coughing with phlegm or pus, chills, and difficulty breathing.

Refers to a collapsed lung that occurs when air leaks between the lung and the chest wall. As a result of this defect, air pushes on the outside of the lung and makes it collapse, allowing it to expand during the normal breathing process. A pneumothorax can be caused by a blunt or penetrating chest injury, certain medical procedures, or damage from underlying lung disease. Symptoms often include sudden chest pain and shortness of breath.

Occurs due to the buildup of fluid in the pleural space of the lungs, which is the area between the layers of tissue that lines the lung and the chest cavity. The type of fluid residing between these layers can be very helpful in the diagnostic process. If there is transudate fluid, heart failure or cirrhosis is very likely. If the fluid is exudative, lung infection or malignancy may be the cause.

Also known as pleuritis, this condition refers to the inflammation of the pleura, a membrane consisting of a layer of tissue that lines the inner side of the chest cavity and the layer that surrounds the lungs. Symptoms are often described as sharp chest pain that worsens with breathing.

Perhaps the most common cause of epigastric pain (pain felt in the upper chest), GERD leads to a burning sensation behind the sternum that is felt in the epigastric region. GERD occurs due to the regurgitation of stomach acids back up into the esophagus, leading to tissue irritation. GERD can be managed with lifestyle changes and the use of over-the-counter antacid mediation. However, some individuals may need stronger medication or even surgery to remedy their symptoms.

Painful contractions of the esophagus can feel like sudden, severe chest pain that can last for a few minutes to a few hours. While in the majority of cases, treatment may not be required, sometimes spasms are frequent enough to prevent the passage of food and liquids from traveling down the esophagus.

Also known as biliary calculi, these stones are formed due to imbalances in the level of cholesterol in the body. However, they may also form if the gallbladder does not empty efficiently. Gallstones may range in size from one millimeter to several millimeters and usually do not cause any problems until they are big enough to block the bile ducts, which lead to pain. Symptoms of gallstones present as severe abdominal pain, jaundice (yellowing of the skin and eyes), and fever.

A condition whereby inflammation has overtaken the pancreas, leading this organ to not function as it should. The pancreas is an organ of the body that produces enzymes that help with digestion as well as hormones to regulate how the body processes sugar. There are a number of different causes of pancreatitis, such as alcoholism and gallstones.

Due to ulcer formation inside the lining of the stomach as well at the upper portion of the small intestine. Peptic ulcers often lead to pain that radiates up to the epigastric area. Ulcers can be the result of H. Pylori infection, long-term aspirin use, or the use of other painkillers such as ibuprofen and naproxen. Contrary to popular belief, peptic ulcers are not caused by stress or spicy foods, but can make the symptoms of an existing ulcer worse.

A late stage complication of liver disease that is characterized by scarring of the liver (fibrosis). The condition prevents this important organ from performing necessary functions, such as detoxifying harmful substances, cleaning the blood, and making vital nutrients. It can be caused by several diseases such as hepatitis and chronic alcoholism.


What are the symptoms of right side chest pain?

Depending on the underlying cause, right chest pain may also be accompanied by the following symptoms:

Treating your specific cause of right side chest pain will depend on the root cause of it. Some conditions may only require lifestyle changes and diet modification, while others require lifelong use of medications or even surgery. It is important to work closely with your doctor to find out all the things you can do on your own to reduce the risk of serious complications.

Should you worry about right side chest pain?

There are many causes that lead to the development of right sided chest pain. However, most cases are not directly related to the health of your heart. If you feel chest pain on your right side, it is relatively safe to assume that it is not caused by your heart and that another cause is most likely the culprit.

However, if you are experiencing extreme chest pain, regardless of the location, going to your local emergency room is highly recommended.

Also Read: Chest pain that comes and goes for days