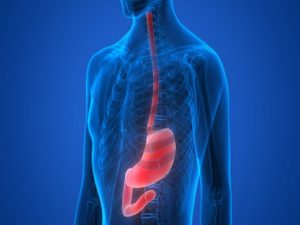 The stomach, intestine, spleen, and pancreas all drain blood into a blood vessel system known as the portal vein, which gets carried to the liver. Much of this blood is rich in nutrients that have been extracted from the gastrointestinal tract. It makes a pass through the liver first as that filters out any toxins you may have ingested as well. It is estimated that about 75 percent of the blood that enters the liver flows from the portal vein. This blood then leads the liver to travel to the heart and be part of the circulatory system.

In cases of liver disease, which can lead to excessive scarring and hepatocellular damage, blood flow through the organ can become slow. As a consequence, the pressure in the portal vein starts to increase, leading to a condition called portal hypertension. There are several branches of the portal system that extend from the esophagus, and as a result of increased blood pressure in the portal vein, the development of large, within the esophagus is likely to occur.

The development of esophageal varices may also stem for other causes of portal hypertension, including blood clots (thrombosis) in the portal vein and parasitic infection.

What are the symptoms and risk factors of esophageal varices?

Symptoms of esophageal varices are typically non-existent until they begin to bleed. If bleeding occurs, it may present with the following:

Risk factors for the development of bleeding esophageal varices include:

How are esophageal varices diagnosed?

Seeing a doctor for a sudden case of unexplainable bloody vomit will likely prompt your doctor to suspect a bleeding lesion of the esophagus. However, to deduce where the blood is coming from, a full medical history and discretion of currently presenting symptoms will take place. The most common condition leading to esophageal varices is liver cirrhosis, which will cause the majority of diagnostic testing if it is present.

Diagnostic testing investigating the signs of esophageal varices include:

Endoscope exam: The preferred method for esophageal varices screening and involves inserting a thin, flexible, lighted tube called an endoscope through the mouth and down the esophagus. A detailed inspection of vessel size, color, and signs of bleeding will be noted.

Imaging tests: Includes the use of CT scans and Doppler ultrasounds of the splenic and portal veins.

Capsule endoscopy: Involves swallowing a capsule-sized camera. which takes pictures all throughout the digestive tract. This is an option for those unwilling to undergo an endoscopy exam.

What are the treatment options for esophageal varices?

Treatment for esophageal varices will specifically primarily aim to prevent bleeding. The following are some of the treatment measures commonly used:

Lowering portal vein pressure: Can be done using medication such as beta blockers which include the likes of propranolol (Inderal, Innopran) and nadolol (Corgard).

Using elastic bands on varices: Done for varices at high risk of bleeding and are commonly referred to as band ligation. It is done using an endoscope, which helps locate the particular varices to be wrapped with an elastic band. This essentially strangles the affected vein preventing the chance of bleeding.
In cases of bleeding esophageal varices, immediate medical attention is required to stop the bleed as it may become fatal. The following are the treatment measures commonly done during bleeding esophageal bleeds.

Diverting blood flow from the portal vein: Done so via a surgical procedure called transjugular intrahepatic portosystemic shunt (TIPS) which involves the placement of a shunt between the portal vein and the hepatic vein, which carries blood from your liver to your heart. However, this procedure can carry several complications.

Preventing infection: Bleeding increases the risk of infection that can be mitigated with antibiotic use.

Liver transplant: An option for those with severe liver disease or those who experience recurrent bleeding esophageal varices.

Eating a soft diet: Eating food requiring minimal chewing, which includes food like bananas, yogurt, and other foods that are made soft by cooking, mashing, or chopping, will limit esophageal irritation. Hard or rigid foods such as taco shells or tortilla chips may tear the enlarged veins in the esophagus if not careful.

Promote bowel regularity: Straining too hard in cases of constipation can lead to an increased risk of rupturing esophageal varices. It is therefore promoted to prevent constipation by incorporating the following foods:

How to prevent esophageal varices

While there are no surefire methods for preventing the development of esophageal varices in people with liver disease, there are several strategies one can employ avoid liver disease complication. These include:

While a major complication of esophageal varices is the risk of bleeding, only a fraction of people with them actually develops this problem. However, when bleeding does occur, bleeding esophageal varices can be fatal in up to 50 percent of patients.

The use of elastic band ligation is effective for controlling first-time bleeding episodes in about 90 percent of patients with bleeding esophageal varices, however, about half of these patients are expected to have another episode within one to two years.