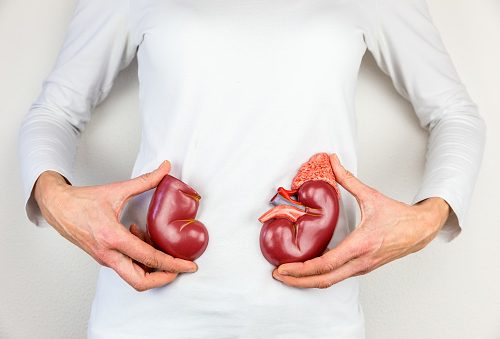 Suffering from atrophic kidney means that one kidney is smaller in size than the other. Humans are normally born with two separate kidneys located on the left and right side of the vertebral column within the abdomen. They are considered vital organs of the body and are responsible for getting rid of toxic metabolic waste and maintaining fluid volume, electrolyte balance, and secreting various hormones.

If they kidneys were to be damaged in any way, overall kidney function would be affected. If kidneys are placed under stress for prolonged periods of time—sustaining damage—atrophic kidney can occur.

What are the causes and symptoms of atrophic kidney?

Atrophic kidney can be caused by many different illnesses and diseases that affect the kidney system in some way. Kidneys may become diseased or nonfunctioning due to a restriction of blood supply to the organ, leading various internal kidney structures to shrink in size. This shrinkage extends to the overall size of the kidney. The following are some causes for this condition:

Depending on the original underlying cause of the atrophic kidney, treatment will differ. Kidney shrinkage is often the result of external forces either starving the kidney of blood or directly damaging its internal structure. Knowing exactly what the pathophysiology for a particular case of atrophic kidney development is will dictate the most efficient treatment option. Kidney atrophy due to chronic kidney disease may require dialysis, and kidney atrophy caused by a chronic urinary tract infection would require antibiotics.

An atrophy can be found on one or both sides, depending on the severity of the disease. Generally, the first necessary thing is to assess how efficient current kidney function is and to then move forward from there. If one of the kidneys is found to be completely non-functional as a result of irreversible damage, there is no other option then to remove it. However, even if only minimal function remains, every attempt is made to restore kidney function to what it once was.

For those who have been diagnosed with atrophic kidney or any other pathological kidney disorder, it may be useful to know what foods to consume and which to avoid, helping ease the load the kidneys need to handle. During states of kidney shrinkage or disease, its functioning cells are not working at optimum capacity, making it harder for the kidneys to do their job. The following are some food recommendations that someone with a kidney condition should be aware of:

Atrophic kidney can be a complicated condition that requires prolonged treatment and constant monitoring. It is important to stay in close relationship with your doctor and discuss any concerns you have about the condition.