Home » Health News » Can You Thaw a Frozen Shoulder? 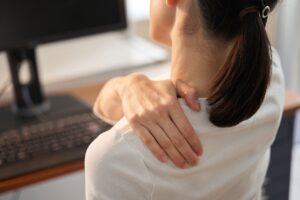 If you’re one of the two to five percent of people affected by the frozen shoulder, you might be wondering what you can do to regain function.

Ever heard of frozen shoulder? You’re not alone. The condition, also known as adhesive capsulitis, happens when inflammation and scar tissue take over the shoulder joint and leads to stiffness and variable pain in the joint and arm.

Stiffness tends to be at its worst in the beginning but typically improves over time. Pain tends to increase over time and worsen when movement is involved.

It’s not exactly clear why this condition occurs, but data suggests it’s more common in people with conditions like diabetes, Parkinson’s disease, and thyroid disease. A frozen shoulder can also occur if the joint has been immobilized due to injury, surgery, or other acute issues.

Frozen shoulder generally moves through three stages, the duration of which can vary between individuals.

First is the freezing stage. This is when the shoulder becomes inflamed, and the shoulder capsule shrinks, ultimately causing pain and stiffness. This stage can last for two to nine months.

Once the freezing has taken place, it enters the frozen stage. In this phase, the shoulder remains stiff, which limits the range of motion. The pain, however, may begin to recede. This stage will typically last for four to six months.

Next is the thaw. The joint will begin to loosen up, and a greater range of motion will be restored.

Generally, the condition will improve on its own, but it can take between six months and two years to fully regain movement and function.

Physical therapy is crucial to recovery. However, it needs to be carefully managed. Too much stretching can make the condition worse, while too little can extend the suffering.

Gentle, brief stretches are often used early in treatment, which progresses to more muscle-strengthening and mobility-based work. Working with a physical therapist is highly recommended.

If you’ve got a frozen shoulder, it can be thawed. It just takes some time and effort.