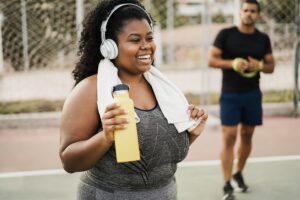 There has been a lot of information about body fat in recent years, and some of it has been good. Is it possible you’re carrying around a bunch of “good” fat?

It’s unlikely that anybody will carry all “good” fat, and if you’re carrying a lot of fat, it almost certainly isn’t “good.” But even “bad” fat serves a purpose that, in small amounts, contributes to health and functionality.

For a long time, it was believed that offering insulation against the cold was the only function of fat. But a lot has been discovered in the past few decades. Fat, or adipose tissue, contains cells full of fat, blood vessels, nerves, immune system cells, and more.

The most common type of fat is white fat. It is predominantly located in the chest, abdomen, and upper legs. Too much constitutes obesity and is associated with various health problems like chronic inflammation and heart disease.

White fat, however, does serve several functions. It is like a rechargeable battery that stores energy from food and continually releases it for the body to use as fuel. Without that constant energy supply, we wouldn’t be able to function without constantly eating.

Brown fat is often referred to as “good” fat because it helps burn fat and boost metabolism. It’s typically located in the neck, shoulders, chest, and abdomen, but in much smaller amounts than white fat. On average, people have less than one hundredth the amount of brown fat than they do white.

Where you carry fat can make a difference. Visceral fat, which is largely located in the abdominal area and can encase organs, is most closely associated with health risks.

The healthiest fat profile is to have a small amount of visceral fat, relatively more brown fat, and relatively less white fat.

No one knows how to boost levels of brown fat. However, you can reduce white fat by eating a healthy diet and boosting activity.