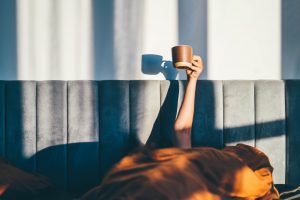 A new study has found caffeine’s effects on visual acuity could help to increase accuracy for detecting moving targets. Caffeine has long been known to increase the velocity of rapid eye movement. Still, researchers set out to further investigate how it enhances visual processing and facilitates the detection of moving visual stimuli.

Participants were separated into two groups for the study, and the tests were run over two separate days. Half of the studies participants ingested a caffeine capsule while the other half ingested a placebo capsule. Computer-based tests were used to measure each participant’s dynamic and visual acuity skills before and 60 minutes after caffeine ingestion.

It was found that participants who had taken the caffeine capsules showed significantly greater accuracy and faster speed when identifying smaller moving stimuli. Researchers believe that caffeine positively influenced their stimulus processing and decision-making. Eye movement velocity and contrast sensitivity were also sensitive to caffeine intake.

“Our findings show that caffeine consumption can actually be helpful for a person’s visual function by enhancing alertness and feelings of wakefulness,” said Kristine Dalton, who was involved in the study. “This is especially true for those critical everyday tasks like driving, riding a bike or playing sports, that require us to attend to detailed information in moving objects when making decisions.”

Visual acuity refers to a person’s ability to detect and recognize small details and can be measured under stationary or moving conditions. Moving conditions, also known as dynamic conditions, can provide important information about how we interact with the world around us.

This study is the first of its kind to find that caffeine can improve visual health. Researchers concluded the study suggesting that caffeine can increase the alertness and detection accuracy for moving targets. Caffeine was also found to improve participants’ reaction times.