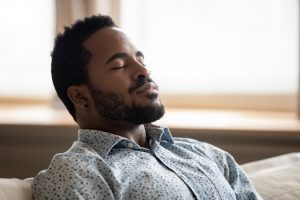 A new study has found that just five minutes per day of a breathing exercise can lower blood pressure in weeks, exhibiting a similar response to daily exercise or blood pressure medication.

The breathing technique, called High-Resistance Inspiratory Muscle Strength Training (IMST), has been described as “strength training for your breathing muscles.”

This ultra-efficient form of breathing may be yet another tool to help aging adults fight off cardiovascular disease.

So, next time you’re watching TV, give it a try!

IMST was developed in the 1980s to help respiratory disease patients strengthen their diaphragm and other breathing muscles. It involves vigorous inhalation through a handheld device that provides resistance – like sucking through a tube that is trying to suck back.

The study followed 36 otherwise healthy adults ages 50 to 79 with above normal systolic blood pressure (120 millimeters of mercury or higher). Half practiced high-resistance IMST for six weeks and the others followed a placebo protocol.

After six weeks, the IMST group showed an average 9 point reduction in systolic blood pressure. That is more than walking for 30 minutes a day, five days per week. It also performed as well as some blood pressure medications.

No one is saying to stop walking, but this breathing practice is certainly another tool for the arsenal.

Breathing is a form of resistance exercise, so perhaps the body recognizes it as such by pumping more blood, releasing nitric oxide, and other physiological changes initiated by exercise. Because it focuses specifically on breathing, it may maximize oxygen uptake for added benefit.

If this is something you’d like to try—and it takes as little as five minutes per day—talk to your doctor. They can provide you with adequate training on using the device safely, and offer information on how you should feel while performing the breathing exercises.