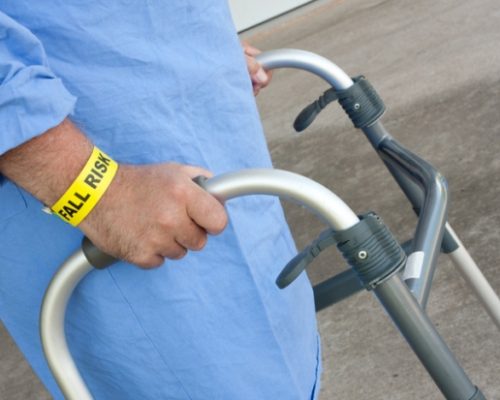 Brain activity in older adults measured while walking and talking may predict the risk of falls. Study author Joe Verghese explained, “In older people who had no signs of disease that would make them prone to falls, higher levels of activity in the front of the brain, called the prefrontal cortex, were associated with a higher risk of falls later in life. This suggests that these people were increasing their activation of brain cells or using different parts of the brain to compensate for subtle changes in brain functioning.”

The researchers looked at 166 people over the age of 75 with no disabilities, walking problems, or dementia. The researchers used brain imaging to measure changes in oxygen in the blood in the frontal part of the brain while participants walked, recited parts of the alphabet, and did both at the same time. Participants were then interviewed every couple of months over the next four years regarding any fall incidents.

Seventy-one people reported 116 falls, with most falls being mild.

Higher levels of brain activity while both walking and talking were associated with falls. Verghese concluded, “These findings suggest that there may be changes in brain activity before physical symptoms like unusual gait appear in people who are more prone to falls later. More research needs to be done to look at how brain and nerve diseases associated with falls impact brain activity in their earliest phases. We also know there are other areas of the brain which may play a role in increasing fall risk, so those too should be studied.”

Tai chi may prevent falls in older people and improve mental health, according to research findings. On the other hand, this ancient Chinese technique does not improve cancer or rheumatoid arthritis symptoms.

The researchers reviewed 35 studies on tai chi and looked at its effectiveness in treating various conditions, such as cancer, Parkinson’s disease, musculoskeletal pain, osteoarthritis, rheumatoid arthritis, cardiovascular disease, high blood pressure, osteoporosis, and type 2 diabetes. Some studies also looked at the benefits of tai chi on psychological health, along with balance and fall prevention.

The findings were contradictory for some of the conditions, but it was quite clear that tai chi helps improve balance, prevent falls, and boost psychological health. The authors concluded, “Our overview showed that tai chi, which combines deep breathing and relaxation with slow and gentle movements, may exert exercise-based general benefits for fall prevention and improvement of balance in older people as well as some meditative effects for improving psychological health. We recommend tai chi for older people for its various physical and psychological benefits. However, tai chi may not effectively treat inflammatory diseases.”