Home » Health News » Boost Your Hearing, for Better or for Worse 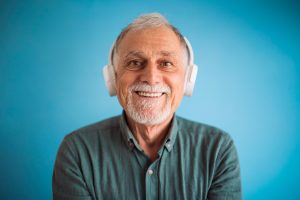 According to a new study, how you listen may influence your ability to retain information. The study, however, isn’t about “active” listening or ways to become a better listener. Instead, it looks at a common tool that may play a big role in perception.

Depending on who you ask, headphones can be great. On the one hand, they can allow people to enjoy sounds without bothering others while creating a more personal listening experience.

Others may argue that they can contribute to social isolation, ear damage, and make people more easily influenced.

The research, published in the journal Organizational Behaviour and Human Decision Processes, says that headphones have a significantly greater impact on listeners than external speakers because they put “voices inside your head.”

Headphones create a phenomenon called in-head localization, making the speaker, or sound, sound like it’s inside your head. This allows listeners to feel closer to the communication, both physically and socially. The result, researchers say, is that listeners perceive what they hear as warmer and are more likely to feel and behave more empathetically to what they are hearing. This may make them more easily persuaded.

Investigators used experiments and surveys involving more than 4,000 people and learned that headphones have a much stronger effect on people than external speakers.

This can be useful, for example, if you’re having a video call with your doctor. Wearing headphones may help you better retain the information and follow their instructions. The headphones may play a very beneficial role when you have something important to listen to.

But they may also be dangerous. For example, they may make listeners more sympathetic or susceptible to influence from potentially harmful on-air personalities like podcasters, radio, or television hosts.

These are all things to think about when deciding how you listen to something.

Another thing to think about is how loud and long you listen with headphones. When headphones are too loud, they can damage sensitive cells in your ear.

Headphones can be turned up much louder than what’s safe, often programmed to hit levels in the 105-110 decibel (dB) range. For reference, a leaf-blower or lawnmower, which can damage hearing, is 85 dB. Damage can occur relatively quickly at this level.

The loudest you’ll want to go with headphones is about 70 dB. Up to that and you should be safe and be able to listen for an extended period. A good gauge is to take the phones off and hold them at arm’s length. If you can hear what’s playing, turn them down.