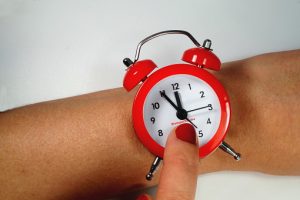 We all have something called circadian timing or a body clock that helps control sleep, wakefulness, hunger, mental alertness, mood, and other systems that operate on a daily rhythm, but for the first time, experts believe that there is a connection between our body clock, body mass index, and the timing of food consumption.

Most of us have heard about the connection between poor diet and weight gain. Many of us are also aware of warnings about eating late at night. Eating later in the day has long been associated with weight gain. However, the impact that the timing of food consumption has in relation to melatonin has never really been fully examined.

Melatonin onset marks the beginning of sleep. A recent study seems to suggest that the timing of food intake relative to melatonin onset is associated with greater body fat and a higher body mass index, as opposed to the time of day or the type of food being consumed. The discovery suggests that each individual’s circadian clock or biological timing could be more important for health than the time of day.

During a circadian timing study, researchers analyzed information gathered from over 100 college-aged men and women. Using a mobile app, the participants’ food intake and timing was documented over seven consecutive days. The research team made it clear that it was important to conduct the body-clock audit on days that the participants were engaged in their regular routines. The researchers assessed each individual’s timing for melatonin onset and their body composition. What they discovered was that people with high body-fat percentages consumed the majority of their calories shortly before going to sleep, which is when melatonin levels were high. Individuals with lower body-fat percentages appeared to consume the vast majority of calories long before their melatonin levels rose. The researchers observed that there was really no connection between body composition and the clock hour of food intake, caloric amount, type of meal, sleep duration, or activity level.


While the investigation was very revealing, the researchers admit that the test was limited in that they only examined the habits of college-aged individuals, which may not be representative of the entire population. Still, the team has concluded that consumption of food during circadian night plays a vital role in body composition.

How we eat or when we eat can be complex. For instance, we have hormones that can increase or decrease our desire to eat. Leptin is a hormone that is made from fat cells and it decreases appetite, whereas the hormone ghrelin is an appetite increaser. Interestingly, one study on sleep deprivation suggests that those who have increased ghrelin levels tend to suffer from sleep problems. Sleep problems can happen even once melatonin has kicked in. There can be various reasons why. Regardless of the reason, what do people do when they can’t sleep? Research shows that many get up and have a drink or snack, which, of course, isn’t the best use of your time, especially if you consider these latest findings that connect melatonin onset, food consumption, and higher BMI.