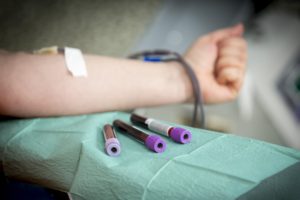 For those who have been diagnosed with diabetes, studies show that it can be a risk factor for many other health conditions, including stroke. But what if a simple blood test could predict their risk of experiencing a stroke in the future?

According to new research published in the journal Stroke, this blood test may soon be available to help prevent a stroke in those who suffer from diabetes. Frederick Korley, an assistant professor of emergency medicine at Michigan Medicine, lead the study that measured levels of a blood protein in patients with diabetes who had not previously suffered a stroke to predict their future risk of stroke.

“To be successful at preventing strokes from occurring, we first need to accurately identify those who are likely to have a stroke so we can target stroke prevention therapies to the correct at-risk people,” said Korley about the study.

“We hypothesized that before an individual has a stroke, they often have ‘small strokes’ that do not cause clinical symptoms. However, these small strokes may result in the release of proteins that are associated with brain cell death, and these proteins can be measured in blood,” he says. “One of these proteins is neurofilament light chain (NfL), the focus in our study.”

The conclusion of the study found that levels of Nfl in the blood appeared to contribute to stroke risk.

“We found that those who developed a stroke had blood levels of NfL that were about 43 percent higher than those who did not develop a stroke,” Korley said. “And those with the highest NfL levels — the top 25 percent of our study participants — were ten times more likely to develop a stroke during the seven-year follow-up period, than those with low levels of NfL — the bottom 25 percent of our study participants.”

It was stated that Korley and his team were quite surprised with the results. The strength of the association between the blood test and stroke was even more significant than they were expecting.

The research team also found that the current method of predicting stroke, the Framingham Stroke Risk Score, when paired with looking at Nfl levels, increased the method’s accuracy.

“The Framingham Stroke Risk Score looks at stroke risk factors in a patient and predicts 10-year probability of a stroke occurring,” said Korley. “The score currently includes factors such as diabetes, current smoking status, and blood pressure. When we added NfL levels as a risk factor, the score appeared to become even more accurate in predicting stroke.”

Although the findings were surprising, and they appear to be accurate in predicting stroke, Korley notes that this is the first study using this blood test in predicting stoke occurrence. He stresses that additional studies are needed to confirm the team’s findings.

Even though this research is still in the early stages, it offers hope to those diagnosed with diabetes. Every 40 seconds an American has a stroke, and this test could be an important tool to help predict risk and prevent stroke occurrence.