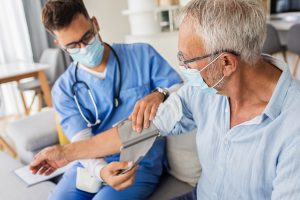 The risk of dementia may be related to blood pressure variability (BPV) in men, according to a new report from Monash University. Researchers suggest that this new information could allow for new treatments and preventative measures in the management of dementia and cognitive decline.

Published in the Journal of the American Heart Association, the paper comes from many important health findings out of the ASPREE (ASPirin in Reducing Events in the Elderly) dataset. This aspirin trial has continued to provide extensive, high-quality data from 19,114 Australians and Americans, which originally rose to acclaim in 2018.

Research such as this report is critical as the population grows increasingly older. It is estimated that by 2050, people aged 60 years and older will outnumber adolescents and youths. As age-related diseases continue to increase, they will definitely become a major health priority.

A Strong Predictor of Dementia

High blood pressure, also known as hypertension, in mid-life has previously been shown to be a strong predictor of dementia in later life. However, this report adds to mounting evidence that short and long-term fluctuations in blood pressure (BPV) are also an indicator of cognitive decline.

Previous studies investigating BPV involved younger people, older people with cognitive impairment, or used a single cognitive assessment tool which limited findings. The ASPREE dataset, on the other hand, was uniquely suited to provide information from a large cohort of participants who underwent standardized blood pressure and cognition assessments on many facets of memory and cognition. They also underwent a depression scale before each annual cognitive test and received long-term follow-up.

Research is suggesting that BPV is associated with structural brain changes which may be the cause of cognitive impairment. However, degeneration of neurons and synapses that are associated with Alzheimer’s disease can also influence the body’s regulation of blood pressure. So, whether these changes are caused by BPV or vice versa is unknown.