Home » Health News » Binge Watching to Keep Up with Shows? You Could Be Putting Yourself at Risk for Blood Clots 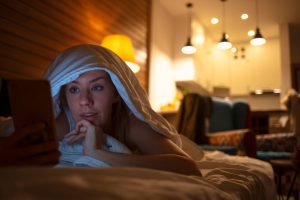 Every week, Netflix and other streaming services release entire seasons of shows, new and old. It can be hard to keep up. Add that to nightly sports and movies, and it seems like it’s impossible to watch it all.

One of the newer TV-watching trends of the past decade is binge-watching. This prolonged TV viewing, which essentially keeps people glued to their sofas, involves immobility and is associated with an increased risk for potentially life-threatening blood clots.

A new study suggests that when the hours slip by watching television, the risk for blood clots in the legs and lungs go up by a whopping 35-percent.

And this doesn’t just apply to people binge-watching television on Netflix. It applies to those parked in front of computers, sports games, or other things that keep them sitting for hours on end.

Exactly how many hours? Researchers pooled data from three previously published studies featuring more than 130,000 participants. They found that in follow-up periods that ranged from five to 20 years, more than 900 participants developed venous thromboembolism (VTE).

They found that those who binge-watched the longest (four hours per day or more) were one-third more likely to develop blood clots than those who either watched the least amount of TV or never binged.

The link is likely due to prolonged sitting, contributing to a lack of blood flow. So, if you watch a lot of TV or do a lot of sitting, try to intersperse it with bouts of activity. This could mean standing up and walking around the TV room between episodes and trying to carve out dedicated exercise time throughout the day.