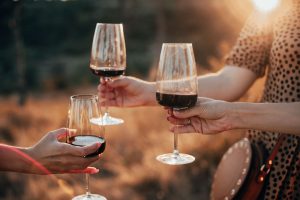 Red wine, berries, and cherries—one is a guilty pleasure, and the other two are bonafide superfoods. But they might all play a role in preventing or treating Parkinson’s.

New research, published in Neurology,  suggests that the antioxidants in red wine, berries, and other colorful fruit may help slow the progression of Parkinson’s disease, a neurological disorder affecting movement.

According to researchers, people with Parkinson’s who eat three or more servings per week of foods high in flavonoids may lower their risk of dying early compared to those who don’t eat as much flavonoid-rich food.

Flavonoids are a type of antioxidant found in a host of colorful fruit and vegetables.

It’s important to note that the study did not prove that these foods, or compounds, prolong life. The connection was only an observed association.

It’s believed that flavonoids can cross the blood/brain barrier quickly and with ease, which may allow them to relieve oxidative stress and inflammation in the brain and help improve blood flow. It’s possible that these effects are what’s lead to the findings.

Researchers collected data on more than 1,200 people with Parkinson’s disease, with an average age of 72, for the study. Participants had lived with the condition for an average of 33 years.

Every four years, the participants were asked about diet. Specifically, how often they consumed tea, apples, berries, oranges, and orange juice.

They found that those who consumed the most flavonoids had a 70 percent higher chance of survival compared to those who had the least. The highest intake was around 673 milligrams (mg) a day, and the lowest was around 134 mg.

To give that some perspective, an apple has about 113 mg, and a 100 gram serving of strawberries has about 180 mg.