Home » Health News » Be Careful If This Is Your Favorite Snack 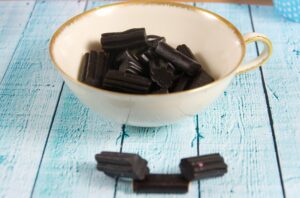 There aren’t many people who are so-so about black licorice. It has its lover and its haters, and that’s about it.

But loving black licorice and eating a lot of it can be dangerous.

At the root of the issue is the actual licorice root. Licorice, or Glycyrrhiza glare, is a type of legume, like beans or peas, that is found in Southern Europe, the Middle East, and Asia. It’s been enjoyed for centuries and was even buried in King Tut’s tomb.

Traditional black licorice flavor comes from a chemical called glycyrrhizin, which is 50 times sweeter than sugar. It has a very potent smell but can deliver much more than flavor.

When eaten in large amounts, black licorice can significantly diminish a person’s potassium levels. Potassium is very important to heart health, and if levels get too low, it can lead to trouble like abnormal heart rhythms and congestive heart failure

There are even instances where high black licorice intake, likely combined with other health factors, have led to death.

And even when the results are not immediate and drastic, glycyrrhizin can lead to long-term heart problems by boosting blood pressure and promoting sodium retention.

Licorice is not usually lethal, but severe reactions are not particularly rare. A 2009 study of women in Finland found that high consumption during pregnancy was associated with poorer cognitive performances in children later on.

Further, the Food and Drug Administration (FDA) warns that black licorice can interfere with some medications, herbs, and dietary supplements, including diuretics and drugs used to treat heart failure.

The FDA also warns that if you are 40 or older, eating 2 ounces or more of black licorice per day for at least two weeks could result in a trip to the hospital for an irregular heart rhythm.

People using black licorice root supplements should also be careful and be aware that there is not much quality work around them to indicate any benefit.

Black licorice made with artificial flavors or anise oil, or red licorice, do not pose the same threat. That doesn’t make them healthy, just that they will not deplete potassium

So, if you love black licorice, snack in moderation. A few twists here and there are likely fine, but don’t go through a bag a day.