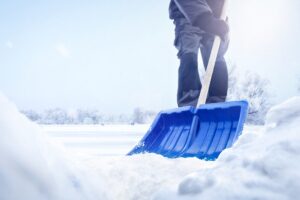 Ah, the winter. The cold temperatures, Christmas lights, and of course, the snow. A fresh blanket of snow looks great and can put a smile on anyone’s face.

But it can also be a huge risk to heart health.

Shovelling snow is not to be taken lightly. Sure, you’ve likely been doing it for the bulk of your life, and it can seem as routine as taking out the garbage, but it’s not. Especially if you don’t get much exercise to begin with.

Even with a snowblower, snow removal can boost the risk of a heart attack or sudden cardiac arrest. Some research suggests that the strain of shovelling heavy snow, 7-8 inches worth, can be just as, if not more, demanding for the heart than a treadmill stress test.
Researchers suggest that hundreds of people die each year in the United States from shovelling snow. They have also learned that only two minutes of shovelling snow can raise heart rates to more than 85% of the person’s max heart rate, which is virtually the same maximum effort as intense aerobic exercise.

Studies have shown that compared to no snowfall, a heavy snowfall of about 7-8 inches was associated with 16 percent higher odds of men being hospitalized with a heart attack and a 34 percent increase of them dying from a heart attack.

Women do not seem to be impacted in the same way as men when shovelling snow, according to a study from a few years ago.

Temperature likely compounds the risk. The cold may increase blood pressure by constricting coronary arteries. Compound that with the higher heart rate from physical exertion, and the risk grows. Even the exertion used to push a snow blower can be dangerous.

Snow removal can be especially dangerous for people who already have cardiovascular conditions, live a sedentary lifestyle, or are obese.

You can offset some of the risks by taking regular breaks during shovelling or getting help from a family member or neighbor. Hiring a snow removal service may be best if you are high-risk and it fits your budget.