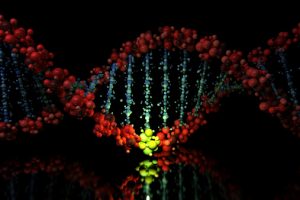 Two people with the same disease-causing mutation sometimes don’t get sick in the same way. This phenomenon has puzzled researchers for decades and so researchers at the University of Toronto worked to uncover why.

“We have shown how genetic background – that is, the unique set of DNA letters present in any person’s genome – influences the severity of any genetic disease,” said Andy Fraser, research team leader.

One example of a genetic disease is when an individual’s gene CFTR is mutated. This can lead to cystic fibrosis. Sometimes this condition is diagnosed within newborns, but other times symptoms don’t appear until later on in life. The CFTR protein allows for the flow of chloride ions in and out of cells. This flow helps move water through the cells, which is an important part in the production of mucus and sweat for example.

The problem for patients, said Fraser, is the uncertainty.

“This is a bit like telling someone that they will have a car crash but not whether this will be a mild bump or a major crash,” said Fraser. He said the ability to predict when a disease will develop can help better prepare people when being diagnosed.

Fraser’s team found when levels of a faulty protein – the mutated part of a gene – drops below a threshold that is when the mutation becomes severe – and symptoms of the disease begin to show.

For this study, worms were first tested to observe a variety of gene mutations. Later on human cells were used to confirm the findings. The conclusion was disease severity is linked with how many faulty proteins an individual has.

The findings were published in Cell.