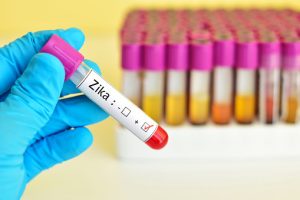 The autoimmune brain disorder, known as acute disseminated encephalomyelitis (ADEM), attacks the myelin in a manner similar to that occurring in multiple sclerosis. The myelin is a protective coating around nerves in the brain and spinal cord. Study author Dr. Maria Lucia Brito Ferreira said, “Though our study is small, it may provide evidence that in this case, the virus has different effects on the brain than those identified in current studies.”

“Much more research will need to be done to explore whether there is a causal link between Zika and these brain problems,” added Dr. Ferreira who will present the findings at the American Academy of Neurology in Vancouver, Canada.
The study looked at six individuals who developed neurological symptoms that were similar to that of Zika virus, dengue, and chikungunya. For some individuals, the symptoms occurred immediately, and for others the onset of symptoms was up to 15 days later.

Of the six, two patients develop ADEM and four developed Guillain-Barre syndrome. After being discharged from the hospital, five patients had movement problems, one had vision impairment, and one had memory and thinking problems. All six patients tested positive for Zika virus.

Dr. Ferreira added, “This doesn’t mean that all people infected with Zika will experience these brain problems. Of those who have nervous system problems, most do not have brain symptoms. However, our study may shed light on possible lingering effects the virus may be associated with in the brain.”

Although cases of ADEM are not as prevalent as Guillain-Barre syndrome, the disorder should still be something doctors look for when testing Zika patients.

Dr. James Sejvar of the Centers for Disease Control and Prevention stated, “Of course, the remaining question is ‘why’ — why does Zika virus appear to have this strong association with [Guillain-Barre] and potentially other immune/inflammatory diseases of the nervous system?”

Continued research may one day help to answer these pressing questions.