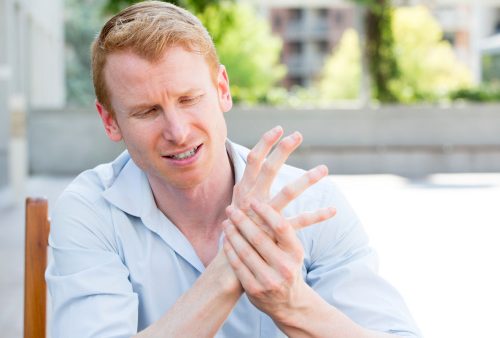 Arthritis is a common term used to describe disorders that affect the joints, but we don’t often hear about arthritis mutilans (AM). It is a severe but rare form of arthritis that attacks bone and cartilage in the joints.

Back in 2003, the New England Journal of Medicine issued a report involving a 94-year-old woman who developed RA early in life. She only sought treatment in her 60s and imaging showed severe bone resorption in her hands and wrists as well as bone tissue collapse. The woman presented with something called telescoping fingers, a condition that occurs when soft tissues can’t hold the fingers up and instead end up together in a heap. Severe deformities tend to appear in RA patients when they are not treated properly.

With arthritis mutilans, the bone and cartilage of joints get destroyed and lead to bone resorption. Unfortunately, bone tissue rebuilding doesn’t happen, so people are left with soft tissues and therefore the bones collapse.

Arthritis mutilans symptoms can be life altering. The main sign of AM is severe bone tissue destruction, which leads to permanent joint deformity. This means that the sufferer is unable to move the joint, making day-to-day tasks extremely difficult. The condition tends to progress and may lead to telescoping fingers and toes, as previously described. There are cases where the bones fuse together—when this occurs, joint function is lost. The fusion is called ankylosis.

Sadly, there are some sufferers who experience a condition known as glass opera hand. In these situations, the fingers are pulled out of shape as a consequence of severe destruction and bone absorption.

Normally AM is diagnosed through physical examination, blood work, and evidence of deformities detected in X-rays or MRIs.

As it turns out, enthesitis, which is irritability of the soft tissue, can help differentiate AM’s parent condition psoriatic arthritis from rheumatoid arthritis. Doctors have come to realize that bone edema scores are high in people with arthritis mutilans. Bone marrow edema or lesions can be detected on MRI and are a cause of significant pain.

Abnormal stiffening of the joint can be an early sign for all types of arthritis, so more detailed examination of bone structure via tests like MRIs can be helpful in reaching an accurate diagnosis.

Early arthritis mutilans treatment is important if in fact, that is the diagnosis. Early, aggressive physical therapy has shown to delay the progression of the condition. For some people, it has meant that they are able to maintain the use of their hands longer. AM can also be treated with medications, including non-steroidal anti-inflammatories (NSAIDS) and corticosteroids.

A 2009 study showed some evidence that AM could be treated with medications called TNF inhibitors. The patients referred to in the study reported joint and skin improvements. Unfortunately, once a deformity occurs, there is little recourse. Sometimes, using a splint can stabilize joints and help reduce inflammation, but rheumatologists caution patients against using a splint for too long, as it can cause muscle weakness.

In recent years, some research has suggested that arthritis mutilans can be repaired with surgeries such as iliac bone graft procedures, which repairs damaged bones and joints, and arthrodesis, an operation that involves joint fusion.

Arthritis mutilans can be painful and disabling, but rheumatologists say that therapy and good care can help sufferers manage this rare form of psoriatic arthritis. How and why some people get AM may not be fully understood, but doctors have discovered that patients who focus on good overall health seem to manage the symptoms better than those who don’t have a good diet, don’t exercise, and aren’t able to manage stress. Hand therapy, occupational therapy, or physical therapy can be essential to AM patients. Although scientific evidence is limited, case evidence suggests that alternative therapies, including stretching, biofeedback, and acupuncture can be helpful.

Living with arthritis? Simple lifestyle and exercise tips to improve your joint health

Preventing arthritis in hand with exercise and natural remedies