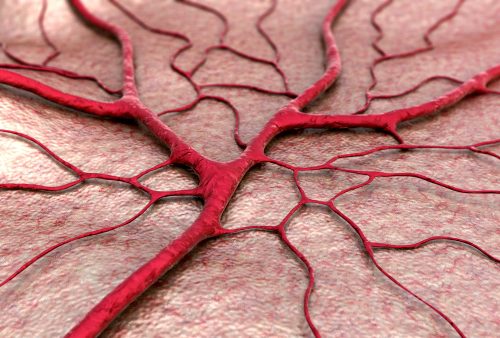 Our circulatory system is needed to provide all living tissue with oxygen-rich blood to maintain survival. Having a defect in this system, as in the case with an arteriovenous malformation, can cause intense pain or bleeding, leading to serious medical problems.

Certain genetic syndromes are known for putting you at risk for having AVMs, which include hereditary hemorrhagic telangiectasia and Osler-Weber-Rendu syndrome. It is only rarely that AVMs affects several people in the same family, and it’s still unclear if this is due to genetics or simply a coincidence.

However, having family members with arteriovenous malformations is considered a risk factor that predisposes you to have an AVM. Men are also at risk as AVMs are seen in them more commonly.

For the most part, people with arteriovenous malformations do not experience any symptoms at all but it can vary wildly depending on the location, size, and blood vessels involved with the AVM. The following are some common presentations of AVMs found around the body.

AVMs of the brain:

AVMs in the limbs and spinal cord:

AVMs found in the organs, chest, or abdomen:

Bleeding in the brain (hemorrhage): Rupturing and bleeding of delicate blood vessels found within the brain can occur as AVMs put extreme pressure on vessel walls. This causes them to become thin and weak over time, making them more likely to spontaneously bleed. It is estimated that cerebral AVM bleeds occurs at a rate of about two percent each year, with the chances being higher in those who have experienced previous AVM ruptures. Approximately two percent of all hemorrhagic strokes are due to brain AVMs.

Reduced oxygen to brain tissue: AVMs will cause blood to bypass the network of smaller blood vessels called capillaries. These small vessels are a very important part of the vascular system, as they innervate organs and tissue, supplying them much needed oxygen and nutrients. Without adequate levels of oxygen in the brain, its tissue may weaken or die. This can result in ischemic damage, leading to stroke-like symptoms.

Thin or weak blood vessels: Caused by the increased pressure caused by an AVM. This may eventually lead the blood vessel to bulge, developing into an aneurysm, which has the high possibility of rupturing.

Brain damage: Having a relatively symptom-free cerebral arteriovenous malformation may allow it to grow bigger as you age. It may become so big that it displaces or compresses parts of the brain. This complication may prevent the flow of protective fluid that normally surrounds the brain, possibly causing fluid build-up that increases pressure within the skull. This can lead to a condition called hydrocephalus in young children.

Once presented with the possible symptoms of an arteriovenous malformation, other causes of similarly presenting symptoms will likely be ruled out first. This typically involves doctors looking for other potential causes for a headache, seizures, or weaknesses of the body. Further testing will involve looking closely at the vessels. These include tests such as:

Computerized tomography (CT) scan: Uses a series of x-rays to obtain a detailed cross-sectional image of your brain or affected body part. Your doctor may also inject you with a contrast dye to make the vessels of the body appear more clearly and in greater detail.

MRI: Uses powerful magnets and radio waves to obtain detail images of your brain or affected body part. MRIs are considered more sensitive than CT scans and are generally the test of choice for looking at soft tissue, such as blood vessels or the brain.

Cerebral arteriography (angiogram): The most accurate test to diagnose an arteriovenous malformation. It allows doctors to reveal its location and characteristics. This information is vital for planning treatment. It involves inserting a thin tube (catheter) into an artery in the groin, which is then threaded up towards the brain. Next, dye is injected into the blood vessels supplying the brain while pictures are taken showing the exact location and size of the AVM.

Treatment will depend on your age, health, and the size and location of the arteriovenous malformation. While medications can be used to treat symptoms such as headaches and seizures, surgery is the most common form of treatment for brain AVMs. The main goal is to prevent bleeding. However, if a case of AVM is in an area of the brain that is hard to treat or doesn’t present with any symptoms, your doctor may feel it is best to simply monitor it with regular check-ups.

The following are various treatment methods that may be implemented:

Surgical removal: Involves conventional brain surgery where a part of the skull is removed temporarily to directly address the AVM. This is typically done if the brain has bled or is in an easy to reach location. Once the AVM has been exposed, neurosurgeons will use a high-powered microscope to aid them in sealing off the AVM with special clips and remove surrounding brain tissue if necessary.

Endovascular embolization: By using a catheter inserted via a leg artery, the area in the brain is reached using X-ray imaging to guide the doctor. Next, an embolizing agent is injected at the site. This is often made up of glue-like particles, micro-coils, or other materials to block the artery and reduce blood flow into the AVM. This treatment is considered less invasive than conventional surgery and is frequently used before it has it can make a surgical procedure safer by reducing the size and likelihood of bleeding of the AVM.

Stereotactic radiosurgery (SRS): Using precisely focused radiation beams on the AVM to damage the blood vessel and cause scarring. This will help to allow the AVM slowing clot off in one to three years following treatment. This is typically done to treat smaller AVMs that may be too difficult to reach with traditional forms of surgery and for those AVMs not likely to cause life-threatening bleeding.

Research into better ways to predict the risk of hemorrhage in those with cerebral arteriovenous malformation is an ongoing process that aims to better guide treatment decisions. Modern innovations, such as 3-D imaging, functional imaging, and brain tract mapping have the potential for improving surgical precision and safety while persevering surrounding blood vessels. advances such as these and in existing treatments for AVM can make previously inoperable AVM conditions much more treatable.