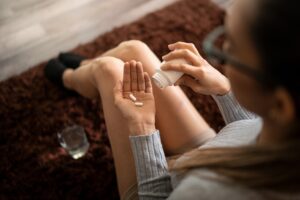 Countless people pop popular pain medications to help them cope with joint pain to make it through the day.

But that short-term relief could come at a long-term cost, according to some new research.

The work found that participants who took non-steroidal anti-inflammatory drugs, or NSAIDs, regularly for four years showed worse results concerning knee synovitis, which is inflammation of the knee.

Researchers also found that cartilage composition was worse in the NSAID users compared to the controls. NSAID pain medications block the production of body chemicals that cause inflammation and are typically taken to provide some short-term relief from arthritis pain.

The most common NSAIDs are aspirin, ibuprofen (Motrin, Advil), and naproxen sodium (Aleve), and are available over the counter at virtually every pharmacy and grocery store.

Researchers looked at data gathered from more than 1,000 participants in a federally-funded long-term observational study of knee arthritis. Participants entered the study between February 2004 and May 2006.

They then compared 277 people who were prescribed NSAIDs for at least a year and compared that with 793 people who weren’t treated with the drugs. All participants also received MRI scans on their knees.

The results may reveal two possibilities. One is that the NSAIDs may not effectively control inflammation in knee arthritis while also causing the cartilage to weaken.

On the other hand, people taking NSAIDs may tend to be more active, thus putting more wear and tear on the joints. They could be using NSAIDs to ease the pain so they can get up and at it.

A randomized-control study would be the best way to determine the effect of NSAIDs on knee pain and structure.

In the meantime, the best ways to prevent or control knee arthritis are to maintain a healthy weight, be active, and build muscle around the joint.