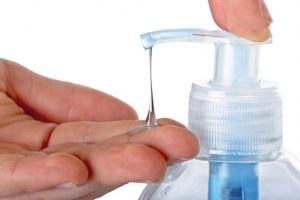 The world is filled with harmful germs. If we allowed them to infect us, it would surely lead to illness. While this usually means getting a cold or the flu, it is still something we would rather avoid. Thankfully, the introduction of antimicrobial products in recent years has not only promised to mitigate germ exposure, but also our fears of contracting illnesses.

Chemicals with antimicrobial properties can be found in soaps, toiletries, toys, and even yoga mats. But these industrial substances designed to keep us safe have been raising serious concerns for researchers and scientists alike.

Health and environment concerns regarding the chemicals triclosan and triclocarban are widespread, gaining the attention of more than 200 scientists and medical professionals around the globe.

“Triclosan is a case study of the many things that can go wrong when formulating consumer products. To start out with, it’s a chemical that contains dioxin—a potent toxic carcinogen. When you use the chemical, it is mostly ineffective in protecting from germs and instead actually may increase microbial risks by producing bacteria that are cross-resistant to antibiotics your doctor prescribes to save lives. It increases susceptibility to allergies. When released into water or soil, it persists for long periods of time and forms additional dioxins. When it is burned, it produces the most toxic forms of dioxin known.”

Triclocarban, another one of these antimicrobial compounds, contains other potent cancer-causing chemicals called chloroanilines.

What is most disturbing is that these supposed antimicrobial chemicals added to our products provide no additional health benefits when compared to using soap and water for handwashing.

Proven to harm the body

Animal studies into the effects of triclosan and triclocarban have even displayed developmental impairment of endocrine processes, which are responsible for hormone and metabolism regulation. This has given rise to serious concern over the long-term use of these chemicals in respect to human reproduction and development.
These chemicals also harm seabirds, fish, and marine mammals, as they often degrade into more harmful substances, including chloroform and chlorinated anilines.

“It’s an air pollutant, a water pollutant, a soil pollutant. It accumulates in the environment and is detectable in the breast milk of over 97 percent of U.S. women. It’s detectable in babies at birth,” said Rolf Halden, director of the Bio-design Center for Environmental Security at Arizona State University.

As of September 2016, the FDA has responded to these mounting concerns and have issued a ban on 19 additives found in over-the-counter consumer washes, including both triclosan and triclocarban. However, this prohibition did not include household products or other antimicrobial items that are outside the purview of the FDA.

The scientists and medical professionals involved in this struggle implore people to avoid unnecessary antimicrobials or turn to safer, greener alternatives. They feel that this fight against harmful chemical will go on for decades.