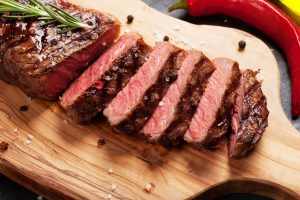 How often do you think about anemia? I rarely do, personally. That’s probably because I’m a 40-year-old man and am not of particularly high risk. My wife, on the other hand, has relatively low iron and keeps an eye on her iron intake.

Perhaps surprisingly, she is not alone. New data is showing that a growing number of Americans are not getting enough iron in their diets, and it is resulting in higher instances of anemia.

A condition that was relatively rare just decades ago is increasing among the population, likely due to modern farming practices and the fact that people are generally eating less red meat, the best dietary source of iron.

Dietary iron helps your body make hemoglobin, a component of red blood cells that carries oxygen from the lungs to the rest of your body. It essentially allows blood to spread to oxygen. Anemia happens when red blood cell levels drop.

Symptoms of anemia include fatigue, weakness, dizziness, pale skin, and can lead to other problems, like heart failure, if it is not treated or ignored.

Researchers used three large government datasets to make their discovery. They looked at anemia rates, iron in U.S. food products, and deaths from iron-deficiency anemia between 1999-2018.

They found iron intake went down 6.6 percent in men and 9.5 percent in women. They also found that iron levels dropped off in 500 foods, including pork, turkey, fruit, vegetables, and beans.

Another factor is dietary habits. Many Americans have abandoned red meat for chicken, while low-carb diets have decreased consumption of iron-fortified cereals.

Red meat offers high levels of the form of dietary iron, heme iron. Heme iron is highly bioavailable and absorbed well by the body. Non-heme iron, which is found in plant foods, is difficult to absorb. Non-heme iron must be consumed at twice the rate of heme iron for the same absorption.

So, what can you do? You can increase red meat intake, for one thing. Eating red meat, a couple of times a week, can serve up the iron you need. Just prioritize lean unprocessed varieties.

If vegetarian, opt to include fortified cereals and juice.

To get the most from dietary iron, be sure to get enough vitamin C every day. It is required for optimal iron absorption.