Home » Health News » An Inspiring Story about the Power of Food 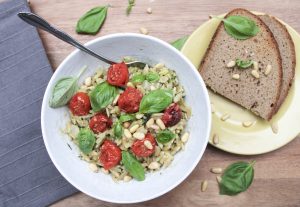 I read a story the other day that I have to tell you about. It shows the superpower of food and how it can help heal the body.

But first, a disclaimer. This story illustrates the effects of a healthy anti-inflammatory on one individual. Their experience may not be replicable, and professional treatment should be your first line of defense.

There is plenty of research to suggest a plant-based diet rich in nutrition can help prevent or manage a host of illnesses. This is a story about how a woman living with a rare condition called livedoid vasculopathy used diet to fight back.

Livedoid vasculopathy is described as a “rare medical mystery” with no known cause. It can lead to painful ulcers on the legs and feet that can flare up intermittently and last for years at a time.

The case study that was published recently in BMJ Case Reports highlights a woman who was diagnosed with the condition in 2013 after battling symptoms for seven years. Her symptoms included swollen feet and “sporadically itching red blotches” on the lower legs and feet, which would “develop into painful oozing ulcers” up to 10 millimeters.

She reported her ulcers started to heal after a month and that symptoms were more manageable. After a year, the symptoms were gone for the first time in eight years. Only when she strayed from the diet did they return, but even then, symptoms were far less severe.

By 2018, her symptoms were gone and only reappeared when she began eating inflammatory foods. Avoiding the Standard American Diet (SAD) seemed essential to maintaining her comfort.

This story shows the potential healing power of healthy food choices. Diet can play a major role in inflammation, vein health, and more, and it can be of great benefit to both disease prevention and treatment.

Of course, diet is no magic bullet, and its effects will vary across individuals. But there is plenty of available research to show that diet can play an instrumental role in overall health and the risk for illness.

Talk to your doctor about food that may help you.