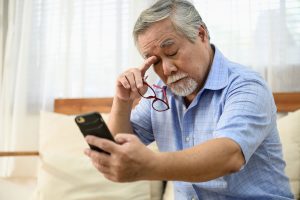 New research is showing that exposure to deep red LED lights in the morning might help protect waning vision as people get older.

The study, conducted by researchers at the University College London (UCL), found that using a simple red light LED device for about three minutes, once per week, was able to effectively recharge retinal cells to improve color vision, much like recharging a battery.

Thirteen men and women aged 34 to 70 participated in the small study. Each was free from eye disease and had healthy vision. Each participant was exposed to three minutes of 670 nanometers (nm) LED deep red light in the morning between 8 and 9.

Vision tests were conducted about an hour after the exposure, and then 10 participants had another test one week later.

On average, there were “significant” 17 percent improvements in color vision that lasted for a week. Some of the older participants saw vision improve by 20 percent for the week.

The timing is important, as well. The red light did not seem to make the same improvements if exposure came in the afternoon.

If these results hold up in more extensive studies, it’s possible that simple red light exposure could lead to an easy and safe way to protect vision with age and improve the overall quality of life.

Red light LED’s are widely accessible and available at brick-and-mortar retailers and online. There is also some evidence to suggest they can help promote skin healing too.