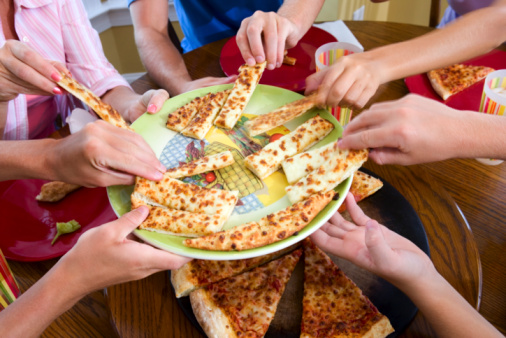 Despite the fact that more and more people are being warned to watch their salt intake, a recent U.S. study showed that 90 percent of Americans continue to consume sodium at levels much higher than the recommended daily intake. This is contributing to some of our leading health problems, such as high blood pressure, stroke, and heart disease, as well as millions of dollars in spending on medical care. And while this has led many people to take precautionary health measures by cutting down on some of their favorite salty snacks, like pretzels and potato chips, new research shows that the real culprit behind continually rising sodium intake is the last one you may have suspected – and one which certainly shows no signs of declining popularity. It would seem that the biggest overall contributor to dietary sodium is America’s beloved pizza.

Salt is where we get our main source of sodium, and contrary to what most people think, most of the sodium Americans are getting comes from processed and restaurant foods rather than voluntarily-added table salt. According to the National Health and Nutrition Examination Survey, between 2003 and 2008, the single biggest contributor to sodium in the diet of young Americans was Pizza. It accounted for a whopping 10.3 percent of intake for 12 to 19 year olds. Pizza came in third for intake amongst adults aged 20 to 50.  Statistics also show that 94 percent of Americans eat Pizza on a regular basis.

What you may not realize is that one measly slice of pizza actually contains quite a lot of sodium. When researchers broke down a slice of pizza they found that not only does the dough contain sodium, the rest of the ingredients, including the cheese, sauce, meats and even the vegetables contain sodium as well.

Despite the high amount of sodium in pizza, some could argue that there are many other food items that are higher in salt and are a contributing factor to illnesses like heart disease. Nutritionists and scientists say that while this may be true, when you take the frequency of consumption into account, the biggest sources of sodium are not always the most sodium-rich foods. Statistics show that 3 billion pizzas are sold in the U.S annually, and that the average American eats about 46 slices each year.


A Recipe for Heart Disease

Government reports indicate that American adults eat an average of 3,466 milligrams of sodium every day. This is more than twice the recommended limit for the majority of people. Ages two and up should consume less than 2,300 milligrams of sodium per day. Those who are 50 and   older or people who suffer from high blood pressure, diabetes or kidney disease should only have 1,300 milligrams per day.

When sodium builds up in the body, it draws water molecules out of the cell and into the blood. The extra water in the blood makes it harder for the body to work, causing stress and damage to the arteries. This can lead to health problems including heart disease. It is important to note, however, that we require a certain amount of sodium in our diets to live healthy lives. Sodium is an important electrolyte that helps maintain the balance of fluid in our body. If the fluid in our body isn’t balanced, or if we have too little sodium, we will feel exhausted all the time and our cells will swell, causing medical problems.

We owe a lot to this white crystal substance.  It has been used for many years and has been an essential ingredient for preserving food, including vegetables and meats. Still, most health experts, including nutritionists at Harvard and officials at the American Heart Association, are eager to get the message out about the excessive amounts of sodium we are exposed to via over-eating of processed foods, requiring most of us to remain continually conscious of our sodium intake. Simply by reducing the amount of processed foods and restaurant foods that we consume, we can begin to successfully bring our sodium levels back to healthy levels, subsequently improving national health and saving billions of dollars each year in medical costs.