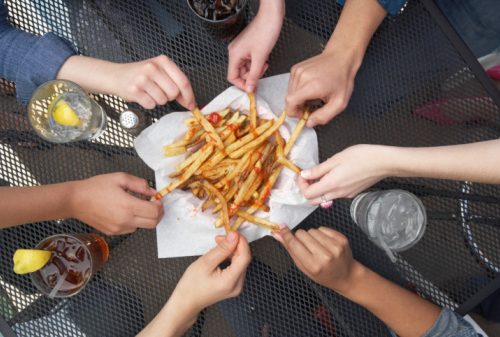 Co-author Satchidananda Panda said, “Most participants thought they don’t eat or drink that regularly outside their breakfast-lunch-dinner routine. Most people also assumed that they had been confining their eating routine to a 10- to 12-hour window.”

After the three weeks was over, researchers found eating habits were not only erratic but continuous as well. Researchers noted that as long as people were awake they were eating, and they ate over a span of 15 hours. Furthermore, the majority of calories ingested occurred after six p.m.

A follow-up study followed eight participants who were deemed obese. These participants were asked to restrict their eating routine to a 10-hour window for 16 weeks. The same app was used to track their meals, calories and what time they ate.

Even though participants weren’t instructed to cut down on the food they ate – only the time they had to eat it – they were able to cut down calories by 20 percent. On average the participants lost seven pounds and improved their sleep and energy levels.

Lona Sandon, an assistant professor at the University of Texas Southwestern Medical Center, did not find the results to be surprising but added, “Basically this new study helps confirm what we already suspect. Eating sporadically and at all hours is just not good for our health.”

She went on to say, “Here is a lack of planning and stability in their eating schedules, so eating just happens whenever. Many skip breakfast, have a light lunch, then find themselves hungry and tired in the afternoon and seeking a pick-me-up from the vending machine, only to get home from work ravenous and wanting to eat anything and everything with no energy to exercise. They then spend the night snacking before bed. This is a common phenomenon.”

Researchers suggest a good way to stick to a healthier eating routine is with planning.